Developers Love The OZ Program. But Are They Delivering On Its Social Mission?

Griffin Capital, an El Segundo, California-based investment alternative asset manager, said this week that it has closed on its fourth opportunity zone investment, one of nine such projects it has in development nationwide.

But as the company pours more than $400M into designated opportunity zones, executives have declined to say what social impact its projects will bring to distressed areas, the primary stated goal of opportunity zone legislation. It is the latest example of a large developer betting on the program's tax breaks without providing guidance on a larger socioeconomic mission. 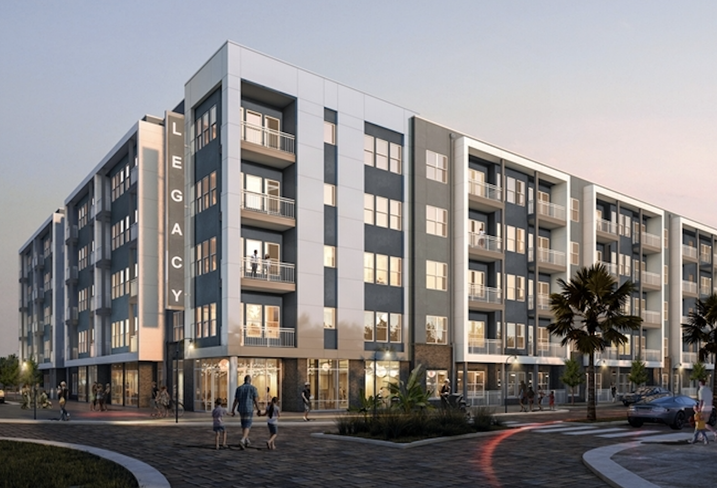 Griffin said Tuesday it has partnered with Legacy Partners to develop Legacy at Encore, a 228-unit multifamily community in Tampa, Florida. This will be the second project developed in partnership with Legacy, the company said, after teaming up last year to develop a 363-unit multifamily community called Legacy at Fitz in Aurora, Colorado. This was Griffin's first opportunity zone land acquisition.

Griffin's move comes as opportunity zone investments pick up amid the coronavirus pandemic, with about $3.3B raised for the sector from January to March 13. Experts attribute the increase in fundraising to a volatile financial market, which drove many jittery investors to pull money out of the markets during the start of the pandemic, possibly as a hedge against an extended downturn if the coronavirus crisis continues.

But criticism of how the program is implemented from neighborhood groups and government watchdogs has become louder. It has been increasingly focused on who benefits from OZ deals, which are made possible by legislation that explicitly states participants must provide positive social impacts to economically distressed areas in order to qualify.

Hailed by President Donald Trump as a panacea for distressed communities when the legislation passed as part of the Tax Cuts and Jobs Act of 2017, the opportunity zone program allows an investor to roll over capital gains into a special fund, which is then used for a long-term investment in a business or property in a pre-selected low-income or distressed neighborhood. In exchange, the investor receives a hefty tax advantage, the most lucrative of which is tax-free capital gains upon exiting the project after 10 years.

Grassroots pressure could help shape the program's implementation; more neighborhood groups are pressuring companies they say are not using the program within the law's stated community benefit guidelines. Last month, the Crenshaw Subway Coalition forced a major developer to back out of its planned acquisition of a mall in a designated opportunity zone in South Los Angeles.

The program was crafted by a bipartisan group of legislators, who trumpeted its benefits to distressed communities and residents long ignored by traditional sources of capital and development. In a May report from the White House Opportunity and Revitalization Council, which oversees the program, the opportunity zone program was dubbed "a once-in-a-generation initiative to lift Americans out of poverty and bring economic and community revitalization to the areas that need it most, particularly during the COVID-19 pandemic."

It has been touted by the Trump administration and business community proponents as a streamlined way to foster economic growth in struggling areas. But it has faced scrutiny over how it compiles data on businesses that participate, how and which specific investment zones were selected, and whether or not participants are actually providing socially impactful programs or resources.

University of Southern California professor Gary Painter said that if this kind of opaque opportunity zone investing continues, "the disadvantaged neighborhoods will remain disadvantaged and only about 1/6 or less of investments [in designated zones] where you will actually see the opportunity zones program making a difference."

Painter is the director of the USC Sol Price Center for Social Innovation, which examines ways to improve the quality of life in low-income areas. Painter said right now, there is no impetus for a company to invest in a distressed neighborhood.

While some proponents have praised the OZ program as a way to provide economic growth and job creation in distressed neighborhoods, with as much as $100B that could be invested nationwide, according to U.S. Treasury Secretary Steven Mnuchin, detractors decried the program as an example of a government-sponsored policy of gentrification and displacement.

Critics have also called it an exclusive and discriminatory program that only cash-flush investors can take advantage of, and say many of these projects were already in pre-development in those areas prior to the passage of the program. An Urban Institute report in June found that developers would have proceeded with their commercial real estate projects without the tax incentive.

The designated opportunity zones were chosen using census data from 2010 and critics have argued that some of the sites selected for the program were already in an upward trajectory as the longest bull market in history took hold post-Great Recession. 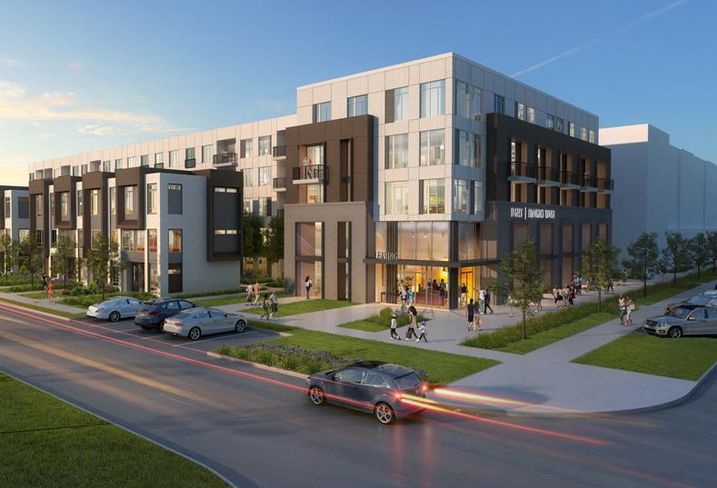 That appears to be the case with Griffin's two announced deals with Legacy, which capitalize on areas that were already on the rise.

In the first opportunity zone deal announced last year, the Griffin/Legacy JV said it will build a five-story, 363-unit market-rate apartment project at 1363 North Victor St. in Aurora. The opportunity zone project sits next to the Fitzsimons Medical Center, which has 30,000 medical students and is undergoing a $5B redevelopment project.

“Legacy at Fitz is an outstanding property in a fast-growing area,” Griffin President Eric Kaplan said in a news release. “The property’s proximity to the large and growing medical campus, a nearby light rail station, dining and retail options, an adjacent Hyatt Regency hotel, and our planned luxury amenities combine to make Legacy at Fitz an extremely desirable, sought-after residential community."

The project announced yesterday is a five-story, market-rate apartment complex at 1251 Ray Charles Blvd. in Tampa. Located in the city's rapidly gentrifying Upper North Franklin Street Commercial District, the building will be situated in a $3B master-planned development called Encore and led by the Tampa Housing Authority. West Tampa has become a target for community activists frustrated by what they say is little input into how the area is developing.

Griffin declined to answer how much equity the companies are putting into each project.

Painter said he is not shocked to see a company investing in an area that is trending upward.

"It's low-hanging fruit," Painter said. "About one-third to a half of the investments in opportunity zones is a pure money transfer between owners of capital. There will be no impact or really measurable social impact and that's really unfortunate."

In a news release announcing the closing of its fourth opportunity zone investment on Tuesday, Griffin Capital Chairman and CEO Kevin Shields said each of the nine opportunity zone projects the company plans to develop were either under contract or had letters of intent prior to the release of the qualified opportunity zone map in 2018.

"Each property, therefore, was pursued by our partners purely on an economic basis completely independent of the QOZ legislation,” Shields said.

If so, the company's participation in the program may have been predicated on its tax advantages. Further questions about how any of Griffin's investments in opportunity zones would tackle social issues were rebuffed.

"The only other information Griffin can provide beyond the press releases is that it is raising capital pursuant to a 506(b) private placement exemption," Griffin spokesman Joe Berg wrote in an email to Bisnow. Berg did not return a follow-up email from Bisnow. 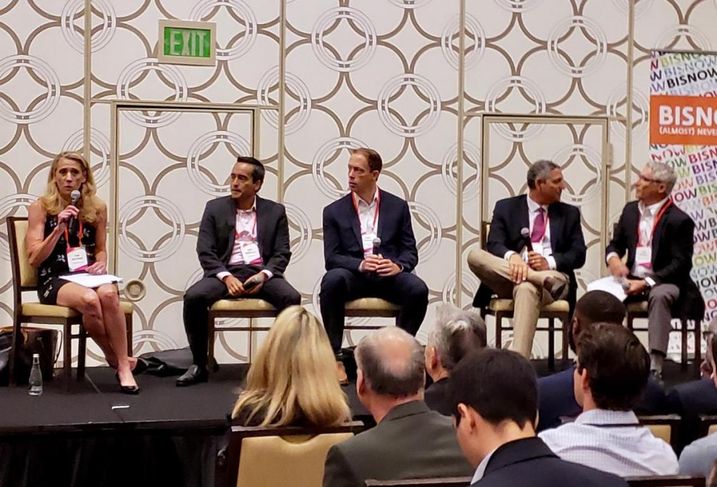 How or when those projects may evolve is not always clear, a common hallmark of the program, which has no accountability or transparency measures attached to its legislative mandates. A bipartisan group of lawmakers last year introduced a bill that called for mandatory opportunity zone reporting requirements that would be made available to the public, but there has been no movement on that bill since November.

Post Harvest Technologies Chairman of the Board and CEO Jim White has been a big proponent of the opportunity zone program and one of the bill's early backers. He is also an author of a book about the opportunity zone program and an industrial warehouse and cold storage developer and operator. White said he doesn't agree with how Griffin Capital is participating in the program.

"I don't like it," White said. "That's not the intent of the legislation or the initiative. We got an opportunity first to make a difference."

White said he is raising money to build and operate a cold storage facility in Salinas, California. He said he thinks it is time for companies participating in the program to turn their focus to how projects could be created for the betterment of the communities they serve.

"If I have a fund, part of that fund is investing in nonprofit and education programs with high-risk youth. This would be great," he said. "You can get that tax deferment and IRR [internal rate of return] and you can do some good as well."