Tech Will Rule Multifamily In The Years To Come

IOTAS CEO and founder Scé Pike is toying with the idea of adding a dumbwaiter to a multifamily development to make it easier in the future for drones to drop off packages to tenants.

As technology continues to advance, multifamily developers and tech providers are adjusting and preparing buildings to pull in a new generation of tenants.

When CGI Strategies’ 60-unit KODO property in Koreatown opens in the next 30 days or so, tenants will receive a tablet in their unit that would allow them to control the temperature, open the front door to allow someone in or access the concierge to report maintenance issues or get information for nearby restaurants.

“We feel like we’re in the hospitality business,” CGI Strategies co-founder and partner Adrian Goldstein said. “It’s not just about providing four walls and an open space, it’s about providing residents with the entire guest experience.”

The multifamily industry is evolving and incorporating smart living technology in units that will change and ultimately drive the growth of the industry, a panel of commercial real estate experts said during Bisnow’s LA Multifamily Market Outlook event Wednesday at the JW Marriott in downtown Los Angeles.

More than 370 people attended the event.

Experts remain bullish on the commercial real estate industry in LA, especially in multifamily. Job growth and lack of supply in Los Angeles is driving the demand for multifamily units and developers are trying to leverage technology to lure prospective tenants and retain them.

Anderson said his company is developing a multifamily property in Little Italy in San Diego that is not near a grocery store. The company is exploring partnering with an online delivery service and creating refrigeration lockers in the building.

“So the groceries come to you,” Anderson said.

While adding dumbwaiters (small freight elevators) for drone deliveries, using tablets that control the home and other tech may seem more convenient for tenants, it could be a waste of space and money, Fifield Cos. President Kevin Farrell said.

He gave an example of his company adding Bluetooth speakers in the living rooms of 2,000 units, costing $800/unit.

“We thought it was the best thing,” he said. “We did a survey. Only 20 to 25% of the residents were using it. Half never even set it up. That was brutal.”

“If we’re going to put smart-home components in residential units, are we going to get paid for it on the back end?” Simone said.

“At the end of the day, does this make the consumer’s life better or not and making your decisions around that,” Anderson said.

Check out more pictures of the event here: 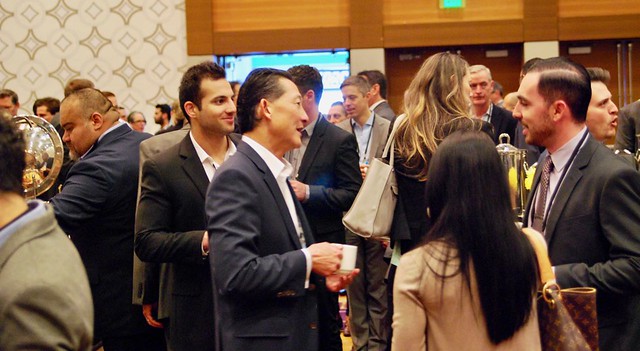