Developers hope the steel modular hotel — set to rise in downtown sometime in October 2020 — can be a shining example of a well-built modular construction product.

In a JV with Netherlands-based hospitality company citizenM, BLVD Hospitality stepped out of its normal comfort zone in adaptive reuse to develop a ground-up, 11-story, 315-key modular hotel at 361 South Spring St. in downtown Los Angeles. 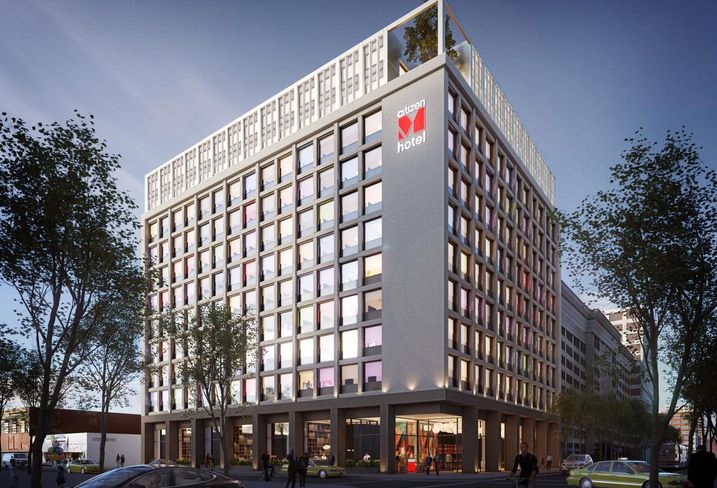 The JV broke ground on the Gensler-designed hotel in June.

This is the first foray into modular construction for BLVD Hospitality, a Los Angeles-based hospitality company that specializes in operating, managing and developing adaptive reuse hotel projects.

Modular construction is a process in which a building is constructed off-site in a factory-styled manufacturing facility.

The company has a strong track record of turning old assets into beautiful boutique hotel products. But going through the modular process — visiting China where the modular factory is located, working with the city of Los Angeles and the state of California for permitting, and being hands-on with designers — has made BLVD Hospitality bullish on the product.

"Modular construction provides more opportunity for projects to be on time and on budget, which is important to the lending process," Western Alliance Bank Senior Vice President of Construction Lending Larry Dalton said.

But many investors and developers have yet to make that leap to modular like BLVD Hospitality did, BLVD Hospitality co-founder and President Nicolo Rusconi said. Many in real estate are risk-averse, he said.

“The real estate industry as a whole to some extent is driven by the comfortability of the financiers [and] the capital that is driving the project,” Rusconi said. “You definitely need an ambassador and precedent of certain methodologies that deviate from the tried-and-true methods."

The potential to adopt modular in construction is great, according to a McKinsey & Co. report released in June.

The report found that the market value for modular in new real estate construction could reach $130B in Europe and the U.S. by 2030. It found that some modular projects have accelerated project timelines by 20% to 50%, and some developers have saved 20% in construction costs.

In the case of the BLVD Hospitality and citizenM hotel, the hotel build-out will only be 16 months as opposed to the traditional build of 22 months. 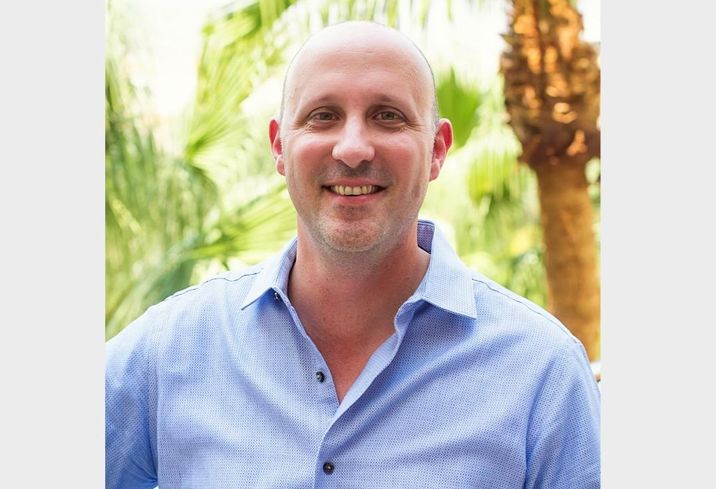 At a time when states like California are facing a severe housing crisis, labor shortages and the high cost of traditional stick-built construction, modular construction is seen as a perfect alternative for creating more units that come to market faster, Lund said.

In hospitality, Marriott is a big proponent of modular construction, opening several modular-built hotels in recent years and soon to open the tallest modular hotel in the world in New York this fall.

Yet despite big backers, the modular industry is still having a hard time gaining acceptance, Lund said.

Lund will be speaking at Bisnow’s Modular Construction Summit Sept. 18 at The L.A. Grand Hotel Downtown in downtown Los Angeles.

Lund said generally there is a lack of modular manufacturing facilities to meet the growing demand, and transporting finished products has been difficult.

Some cities also have difficult permitting that stands in the way of modular making major gains locally. In California, the state has to work with local government planning departments before it can sign off on a project, Rusconi said.

“The demand is far greater than the current manufacturing capability, particularly in the multifamily segment,” Lund said, adding that affordable housing needs by unit are in the hundreds of thousands in many crowded areas. 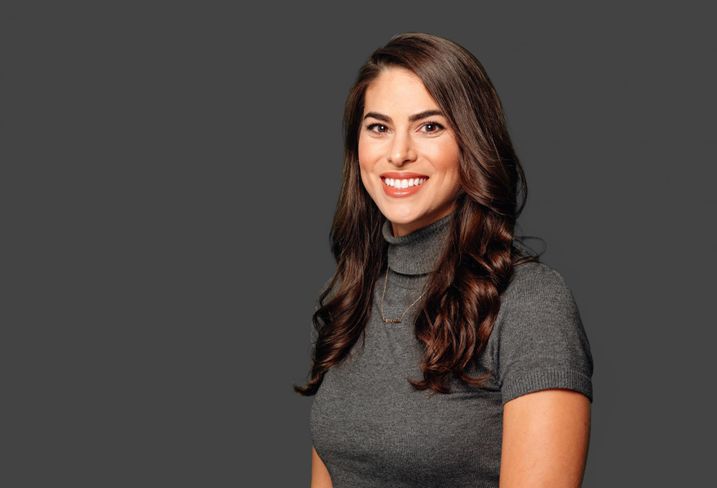 The Modular Building Institute, a nonprofit serving the modular construction industry, estimates that there are only about 200 or so modular manufacturing companies in the U.S.

“New modular manufacturers are popping up all over the place and existing manufacturers, who previously did not participate in multifamily, are beginning to pursue this market and fill the need," Lund said. "But it’s going to take a while for the collective industry capacity to catch up with the existing gargantuan demand."

BLVD Hospitality's Rotter said design could also be a challenge. Hotels that have a strong brand and have a certain unique look in their rooms will have a hard time using modular because most prefabricated construction is uniform.

"It's a little harder to customize each room," Rotter said.

Lund added that organizations such as the American Institute of Architects, the International Code Council, the Modular Building Institute and other advocacy groups are working with industry, state and local municipalities to establish building codes and inspection standards that are specific to modular construction.

The goal is to make the permitting and inspection process more efficient and productive, Lund said.

“[We need to] educate the construction industry as a whole, including developers, lenders and general contractors, on how they can manage the risks of modular construction and maximize the immense potential benefits,” Lund said.

SLP Urban Planning founder and President Stacey Pennington said the biggest hurdle the modular construction industry faces is to convince many old-school developers and investors to change their development approach.

She outlined a familiar trajectory. In traditional stick-built, the lender pays out the money in various stages of construction.

But with modular, the payment has to be upfront, before a project begins. Modular's uniform design and transportation from the finished product at a warehouse to the construction site also have risks.

"You have to front-load your decision-making with modular," Pennington said. "There are still a lot of unknowns and fundamentally, [modular construction] challenges the traditional paradigm." 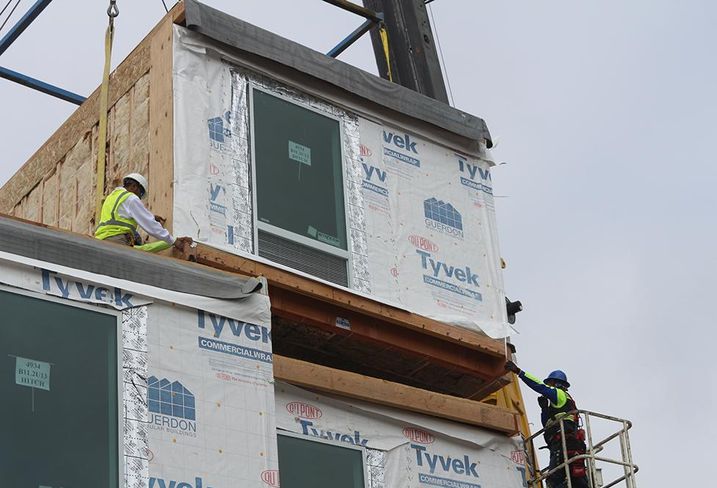 Pennington says she believes in the modular product, but thinks it is going to take a big push from local and state governments to promote it before the method of construction gets fully accepted.

Lund said despite some people's unfamiliarity with it, modular's future is bright.

Marriott, Hilton and several other big companies are backing modular construction and have been encouraging their franchisees to pursue modular. The modular industry is also constantly modernizing, with artificial intelligence and robotics seen as the future of the industry.

Though modular makes up only 5% of the construction market, Lund expects that number to grow.

"As the industry develops, innovates and grows, that number should more than double in the coming years," he said. "The modular industry should roll up its sleeves, get hard to work, and put on its proverbial shades, because it’s future is extremely bright."

For BLVD Hospitality, before breaking ground on its steel modular project, there were times of concern, Rusconi said.

Not only did the city of LA had to sign off on the project but so did the state.

"I wouldn’t say it was a fear-based approach but there were elements of uncertainty with the process,” Rusconi said, adding that this project was the first time the city of Los Angeles' planning department permitted a steel modular build-out.

“There were elements of uncertainty with the process and with how the state and the city were going to coordinate with one another,” Rusconi said. “Fortunately, everyone was very inspired to work through this process as efficiently and comprehensively as possible.”

Rusconi said the key to modular's acceptance and success will ultimately come down to the projects themselves. Once people see the quality of the build, then developers and investors will begin to adopt it.