“It’s a great time to be an office landlord in San Francisco,” according to Columbia Property Trust President Nelson Mills.

There is an influx of companies and workers clamoring to be in the city, the region's job growth rate is at an all-time high and nearly double the national average (according to BLS data), and market fundamentals from vacancy rates to cap rates are eye-popping.

But perhaps life is too great for landlords in the City by the Bay, where some investors foresee unfavorable political tides being added to rising construction costs, leading to a possible market cool-off. Those concerns were among the topics discussed at Bisnow’s San Francisco State of the Market event June 20 at The Fairmont San Francisco.

For office space, there is tons of demand, said CoStar Bay Area Director of Market Analytics Jesse Gundersheim, who summarized the state of the market.

“And despite inventory growth that we’ve had, vacancy rates in San Francisco remain at expansion-era lows of just 6.5%,” he said.

One case in point is the lengths some companies are starting to go to secure space, Gundersheim said. Over 75% of all office space under construction in San Francisco and San Mateo counties is pre-leased, and two companies, Salesforce and Pinterest, have even pre-leased hundreds of thousands of SF in yet-to-be-approved office projects.

Pent-up demand can be found across most property types in San Francisco, most notably in supply-constrained multifamily. The city is the veritable epicenter of a housing crunch that has swept the region, which has seen over three times as much job growth as housing production recently.

In San Francisco multifamily for 2019, rent growth returned to a brisk 4% to 5%, vacancy rates are at an expansion-era low of 3.8%, and the city still has the lowest cap rate among major U.S. metros for multifamily (3.6%), Gundersheim said.

But because of both costs and the political environment, some CRE investors and developers would now think twice about starting new development plans in the city, which has more of a share of regulatory and political surprises, Mills said. He added that Columbia Property Trust has bid, but hasn’t been a buyer in the city in several years given stiff competition for existing assets.

“We weren’t anticipating a 3% Prop C tax a few years ago when we bought properties here, and that’s pretty meaningful. Those sorts of curveballs are hard to anticipate.”

Add labor shortages and sky-high land prices to the mix, and profitable projects are hard to come by, according to some lenders and developers.

“As we’re sitting with our clients and talking about their development plans over the next 12 to 18 months, everybody is just struggling getting things to pencil with what’s happening to costs,” Umpqua Bank Market Manager Bruce Lawrie said. “Couple that with how far along we are in the cycle, and there’s a tendency to not move forward on a number of development deals that could be going forward otherwise.”

“The lenders are around. The outlook is great if you’re under construction and delivering,” Related California Executive Vice President and Chief Development Officer Gino Canori said. “The problem we have and I have is construction costs and lack of labor. Contractors are having a difficult time getting to the finish line and are spread way too thin.”

Canori said the practice of companies building with cash only has exacerbated the labor shortage.

“I don’t think many people in the residential business want to be developing to less than 5% yields,” he said.

And count Canori, as well as Vanguard Properties Director of Investment Sales Alex Kolovyansky, as two of the many CRE experts last Thursday morning who see potentially looming legislation as an impediment to investing and building.

“Pay attention to the political winds. That alone will change the course of your investment, whether it’s entitlement, impact fees or restrictions on office construction,” Kolovyansky said.

He referenced two pieces of legislation as examples: Supervisor Aaron Peskin’s pending bill to require conditional use for anything with more than 25% demolition of a facade, and the Community Opportunity to Purchase Act, which starting in September will give certain nonprofits first right to purchase multifamily properties.

The specter of rent regulation also worries CRE investors. California's Proposition 10, which would have allowed the state’s cities to expand their efforts to cap rent, was defeated in November, but some San Francisco investors and developers don’t think the issue is gone for good, and it is factoring into the decision-making for multifamily development.

Safehold and iStar co-Head of Investments Tim Doherty thinks New York City’s recently passed rent regulation is a plausible sign of what is eventually to come in the Bay Area.

“They’re not going to be the last,” Doherty said of New York City. “These governments all watch each other.”

“The New York legislation is a real cautionary tale because enough regulation guts an investment for an entire component of that market,” Litton said. “There are lenders pulling loans at the closing table this week.”

Kolovyansky pointed to Oregon’s recent cap on 7% rent growth, and the subsequent 38% reduction in multifamily investment, as another cautionary tale.

“Now, 7% rent growth is pretty generous,” he said. “But it’s just the thought that there’s a limitation there, and San Francisco’s doing a lot of the same right now.”

“If you’re a lender, you have to be questioning [future legislation],” Canori said. “If you’re underwriting to a certain debt yield, and some of these initiatives are enacted, then what?”

Related California is currently developing $2.5B worth of projects in San Francisco, Canori said, including 1,800 homes. The company has 9M SF in Santa Clara entitled for offices, homes and hotels for its massive Related Santa Clara project next to Levi’s Stadium. But Canori thinks it makes sense to slow investment.

“I think the break is already here,” he said, adding that he wouldn’t be looking to buy a project in the next 12 to 18 months. “In San Francisco, the political climate and the environmental issues puts a governor [on growth].”

As for ways to continue safely investing, Canori thinks the long-term approach of upward of five to seven years out is a safe one in general, while Litton said Harbor favors San Francisco for its superior liquidity.

“You may not get the price you want,” Litton said of investments in liquid markets like San Francisco, New York and London. “But you can trade out of them.”

Both Litton and Mills said good location, especially that near transportation hubs, is a mitigating factor in a downturn.

Canori may be hesitant to invest further in San Francisco in the near future, but he can enjoy the white-hot CRE market while it lasts.

“We’re delivering a couple buildings this year, and I’m astonished at where the rents are coming in,” Canori said.

Related recently opened its luxury Transbay district tower named The Avery, where Canori said he has been amazed by the leasing.

“Granted, it’s a very nice building and we’re providing a high level of service, but we’re getting up there. When people are willing to pay $4,200 to $4,800 a month for a studio, that’s interesting.”

Click below to view a slideshow of photos from the event: 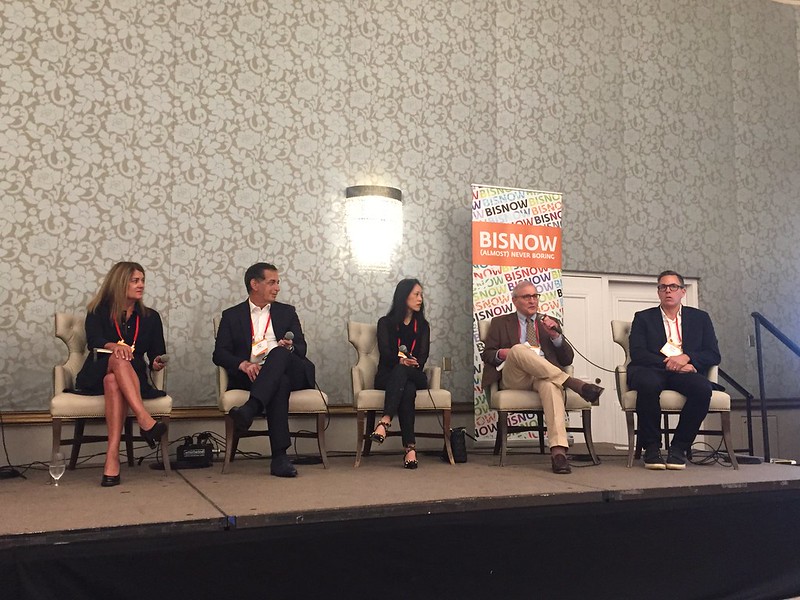