After Massive $1.8B Infusion, Megadevelopment Construction Will Begin Next Year

The developer of one of San Francisco's most far-reaching megadevelopments says a major loan package has made it likely the project will now break ground next year.

Phase 1, approved by the city in 2015, has San Francisco's old inclusionary requirement of 15% to follow, which should translate to approximately 300 below-market-rate, on-site units.

But Maximus has previously signaled it would construct one-third of its required BMR units on-site and satisfy the remaining requirement with in-lieu fees, according to the San Francisco Planning Department website. 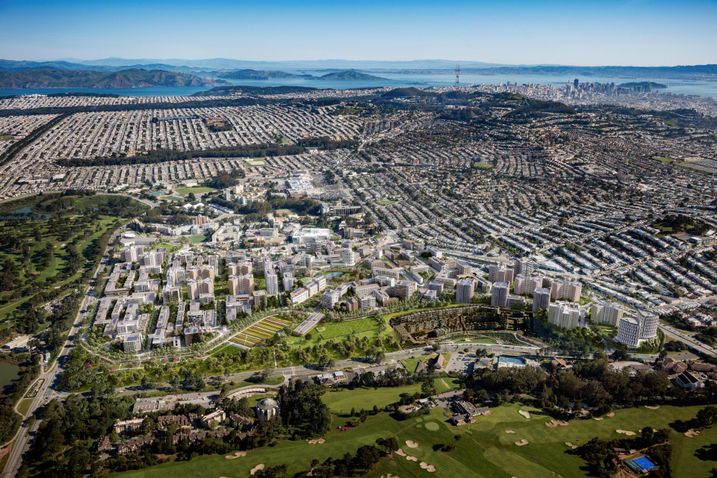 Maximus Real Estate Partners has recapitalized the 3,221-unit Parkmerced with loans from Barclays, Citi and Aimco totaling $1.775B. That's moving the developer one crucial step closer to breaking ground on Phase 1 of a nearly 10,000-unit redevelopment project.

"We will now be able to build nearly 2,000 new homes in the next few years, a huge delivery of new housing at a time when San Francisco desperately needs it,” Maximus Real Estate founder Rob Rosania said.

Before that, Maximus intends to secure construction financing early next year, it said. In total, the Parkmerced project will result in the creation of 8,900 homes in and around the existing community, along with 80K SF of office, 230K SF of retail, a new elementary school and 64K SF of other amenities.

Subsequent phases, which are yet to be approved by the city, would be required to satisfy San Francisco's new 20.5% inclusionary housing requirement.

Rosania, who took partial ownership of the community in 2005 while a principal of New York-based Stellar Management, secured new entitlements for the property in 2011, before forming Maximus with Seth Mallen the next year.

MetLife completed construction on the southwest San Francisco community in 1951. The existing 3,221 units are subject to the city's rent control, which limits annual rent increases to 60% of the inflation rate for older units. The more than 4,000 net new units Maximus wants to create in subsequent phases would be subject to the city's 20.5% and annually rising inclusionary requirement or in-lieu fees.

Barclays and Citi provided a combined $1.5B in CMBS debt, according to Kroll Bond Rating Agency. Aimco, a Denver-based publicly traded REIT, provided an additional $275M in mezzanine financing, the company announced earlier this week.