The Church of Scientology has been buying, building and refitting properties for decades now, gaining a stellar collection across the country. These 10 properties are its most impressive efforts at reusing historical properties.

1. The Church of Scientology Information Center 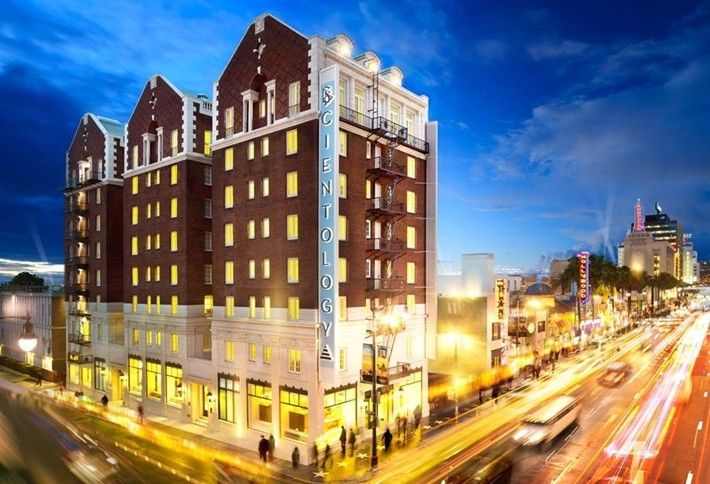 Location: The heart of Hollywood Boulevard in Los Angeles.

Pre-Church History: The building—originally known as the Christie Hotel—was Hollywood's first skyscraper and first luxury hotel. Constructed in 1920 by famous architect Arthur R. Kelley in a Georgian Revival style, the hotel featured ground-level shops, steam heat and bathrooms for each guest room (a luxury for the time). The building was owned by founder Haldane Christie until his death in 1941, then became the Drake Hotel, and later the Hollywood Inn.

Use Today: As the Church's public information center, the building serves as the ultimate introduction for all things Scientology, Hubbard and Dianetics, offering films and books in over 50 languages, lectures and life seminars, and testing and recruitment processes. The upper floors are used as apartments for members. 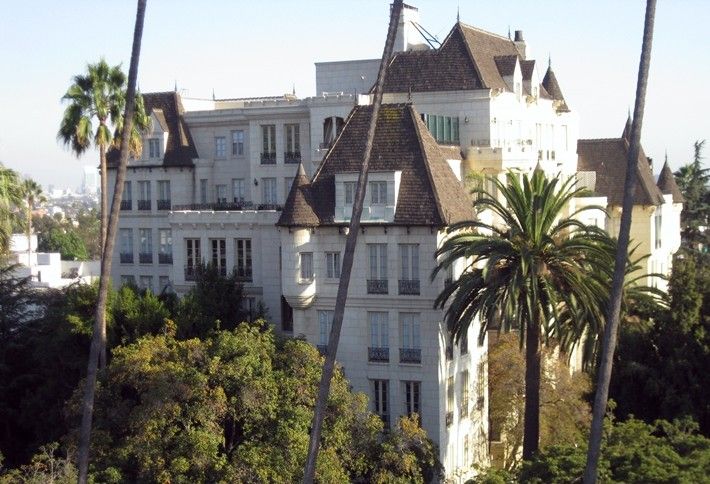 Location: At the base of Hollywood Hills in Los Angeles.

Pre-Church History: Built in 1927 as a replica of a French-Normandy castle, the Chateau Elysee was founded by Elinor K. Ince (widow of silent filmmaker Thomas H. Ince) as a luxury, long-term hotel and apartment complex for the stars. Many famous names of the era—Humphrey Bogart, Katherine Hepburn and Errol Flynn, to name a few—stayed here during the lengthy productions of their films, and enjoyed luxuries like daily maid service and a formal dining room, which hosted many glitzy Hollywood parties.

Purchase: The property was acquired by the Church in 1973 for $1.5M, although the Scientologists had been using it since 1969.

Use Today: Renovated by the Church in the 1990s, and now worth about $75M, the building features religious facilities, a health spa, and a French restaurant available to the public. The hotel is still used by members for spiritual retreats. It's also the location of the Auditing process, which is a type of spiritual counseling that requires the use of a device called an "e-meter." The lower floors are still available for public tours.

3. The Pacific Area Command Base 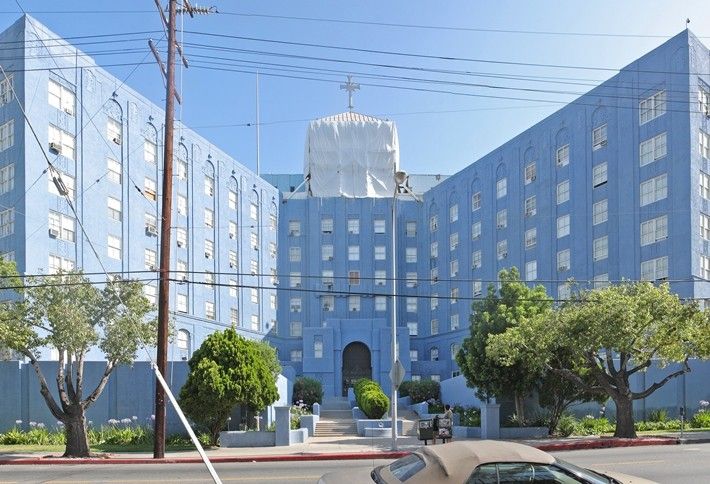 Pre-Church History: Once known as Cedars of Lebanon Hospital, the Claud Beelman-designed building opened in 1930, when the staff of East L.A.'s Kaspare Cohn Hospital moved to this new location. In the next four and half decades, the hospital cared for many Hollywood stars, including Marilyn Monroe, Errol Flynn, Mae West and Burt Lancaster. The administration later merged with Mt. Sinai Hospital, forming the Cedars-Sinai Medical Center in 1976, which led to the move to a new location near Beverly Hills.

Purchase: The Church acquired the hospital in 1976 for $5M.

Use Today: The site is home to the Church's West Coast HQ—otherwise known as the "Pacific Area Command Base"—and surrounded by buildings that house the HQs of the Church's internal divisions and associations, such as its North American publishing company, Bridge Publications. The Church renovated the building in 2010, painting it bright blue and paving an adjacent street—now L. Ron Hubbard Way—with cobblestones.

4. Church of Scientology of San Francisco 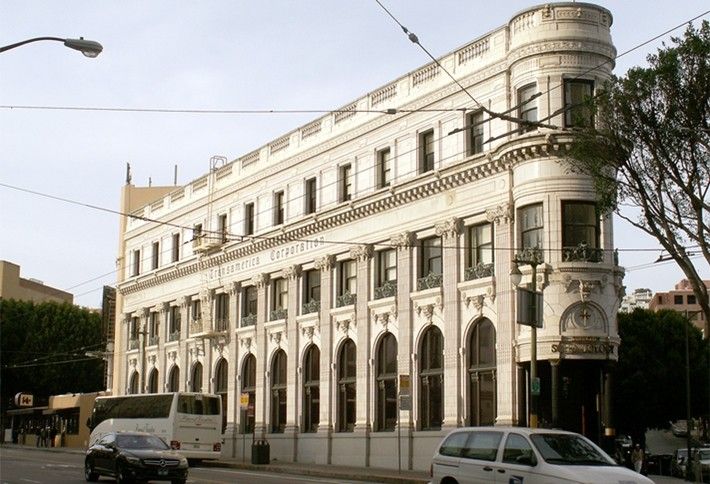 Pre-Church History: In the wake of the 1906 earthquake, Italian businessman John Fugazi opened the Banca Popolare Operaia Italiana ("Popular Italian Bank") for Italian immigrant workers. In 1928, Amadeo P. Giannini of the new, merged Bank of America purchased the building. In the following decade, Giannini added a third floor and rededicated the building as the HQ of his recently formed Transamerica Corp.

Purchase: Taking note of the building's high tourist traffic, the Church bought the building in 1968.

Use Today: The building features an information center (with over 500 films about Hubbard and Scientology, as well as an exhibits showcasing the church's humanitarian efforts), a chapel, a bookstore featuring Hubbard's works in over 16 languages, a classroom for lectures, a training and recruitment facility, a replica of Hubbard's office, and even a spa and detox center. 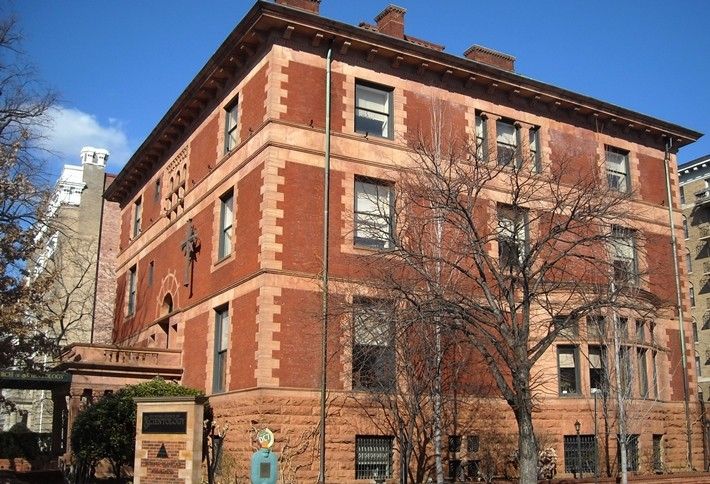 Pre-Church History: Designed by architectural firm Hornblower and Marshall in the beaux arts style, the building was commisioned for $75k by New York merchant George Fraser and served as his home after its completion in 1890. With three stories—including two basement levels and an attic—the building features a central staircase and large halls on each floor. When Fraser died in 1896, his widow sold the mansion to Joseph Earlston Thropp, a Pennsylvania congressman. Thropp made significant alterations, adding a oriel window and enlarging the dormer windows. When Thropp died in 1930, the property was acquired and reopened as a tea house and boarding house in 1932. Then, in 1950, the building was leased to John Goldstein and reopened as the "Golden Parrot" restaurant. Over the decades, the building's ownership, name and purpose continued to change, including restaurants, grills and nightclubs. Eventually, in 1989, Walter Sommer, the current owner, declared bankruptcy when he wasn't able to further renovate due to resistance from community groups. Sommer tried to sell the property for $7M, but the price fell considerably when no one was interested.

Purchase: In 1994, the Church was able to purchase the mansion for $2.7M at a foreclosure auction.

Use Today: Dedicated as the new Founding Church of Scientology, the Church renovated the building for $1M. It features all the customary amenities, including a bookstore, a screening room, a chapel, a lecture room and a detox center. It also features an exhibit on Hubbard's works and milestones. 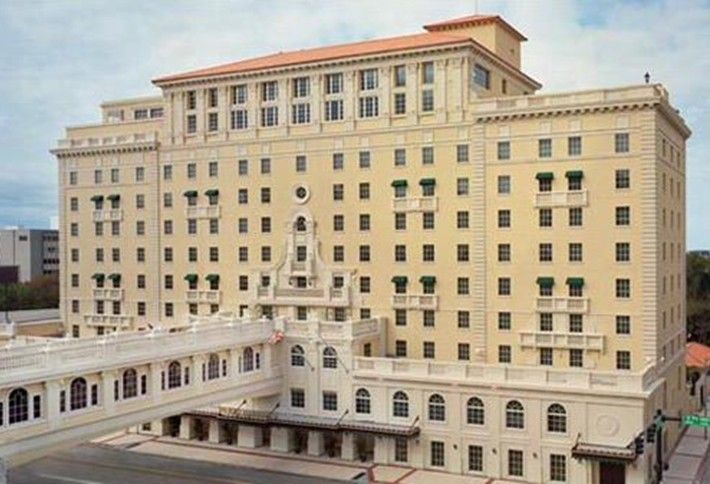 Photo by "The Truth Network"

Pre-Church History: Built by Ed Haley and operated by Ransom Olds of Oldsmobile fame, the hotel originally opened in 1926, replacing one with the same name and functioning mainly as a community center, with its rooftop ballroom and restaurant. When Olds died in 1950, the hotel was purchased by Jack Tar Hotels, who added a cabana. Over the next few decades, the hotel fell into neglect. Despite the decline in service, the hotel was once the spring training home of the Philadelphia Phillies, as well as where the Rolling Stones wrote their famous song "(I Can't Get No) Satisfaction." It even hosted jazz musicians Count Basie and Harry James in the 1970s.

Purchased: In 1975, under the names "Southern Land Development and Leasing" and "United Churches of Florida," the Church purchased the hotel and renovated the building for $2.8M.

Use Today: Now a pilgrimage site and retreat for followers, it's staffed by Church members. In addition to accomodations, the hotel features training facilities for higher members of the Church. There've been reports the hotel is used by the Church's Rehabilitation Project Force, which punishes members who've violated Church policies. 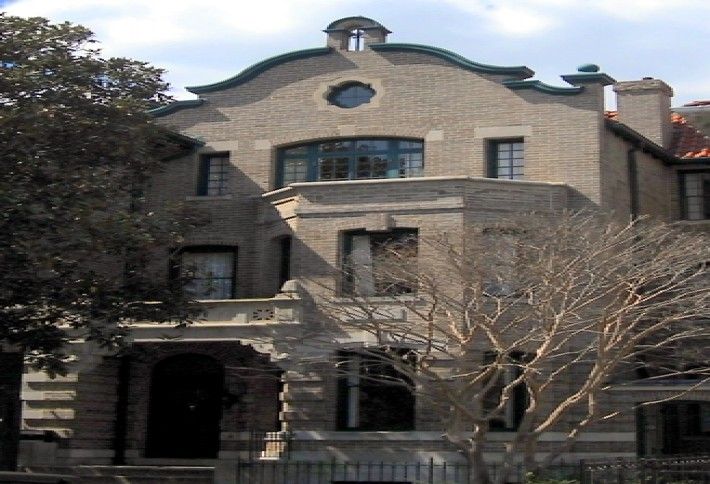 Location: Just a few blocks from the White House in DC, the building is located on "Church Row" alongside the HQs of other major religious organizations.

Pre-Church History: The house was built in 1904 by Wood, Donn and Deming, and housed Sens. James Kimbrough Jones (d. 1908) and Claude Swanson (d. 1939). It's also the former home of the National Academy of American Psychology.

Purchase: In 1955, Hubbard himself purchased the building—his home until 1959. During that time, he established the Founding Church of Scientology.

Use Today: Even after Hubbard moved, the Academy of Scientology used the building until the mid-1970s, when the Church sold the property, despite its importance to its history. The property was eventually repurchased and refurbished in 2004 by an organization known as the "Friends of L. Ron Hubbard." Reopening in 2007, the house is now a museum of Hubbard's life, reproducing its 1950s appearance, and is worth about $2M, according to DC goverment. Tours of the house are by appointment only. 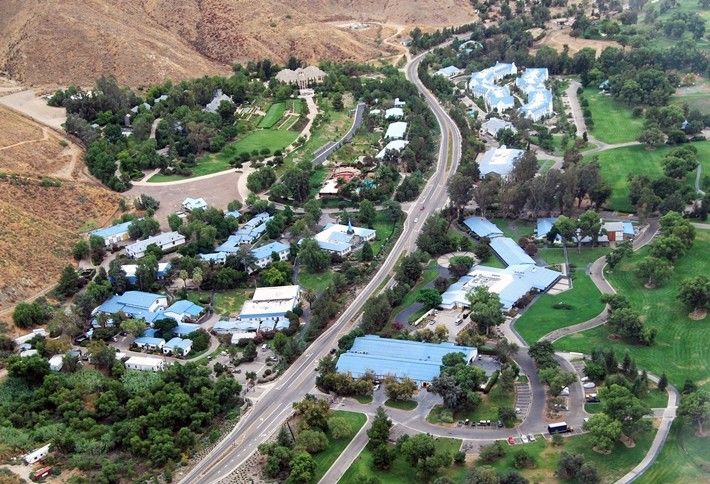 Pre-Church History: The land was originally purchased by Sidney Branch in 1890; he opened a Relief Hot Springs Resort around the natural hot springs. The resort was sold to the Gilman brothers in 1913 for $53k, and was given their name. The Gilmans continued to expand the resort, including building an Olympic-sized pool, a golf course, and a 200-room hotel with a garage and a post office. The Massacre Canyon Inn, built on property's southern portion, featured a training facility that hosted famous boxers like Muhammed Ali, Sugar Ray Leonard and Evander Holyfield.

Purchase: The resort descended into bankruptcy in the 1970s, after the appeal of the signature hot springs waned. In 1978, Hubbard authorized purchase—with $2.7M in cash under the "Scottish Highland Quietude Club." Due to legal troubles at the time (dozens of Scientologists were arrested for allegedly starting an espionage network against the US government), the deal was made in secrecy.

Use Today: The resort is closely monitored and secured, featuring highways, motion sensors, cameras and guard towers. The complex has been expanded considerably, with new houses for members and a $10M house for Hubbard, which he wasn't able to live in before his death in 1986. In addition to holding several organizations, including the Church's media production company (Golden Era Productions) and a movie studio, it's HQ for Church leader David Miscavige and other senior officials, who live and work on the complex. It's also a place for prominent Scientologists like Tom Cruise to study Scientology. 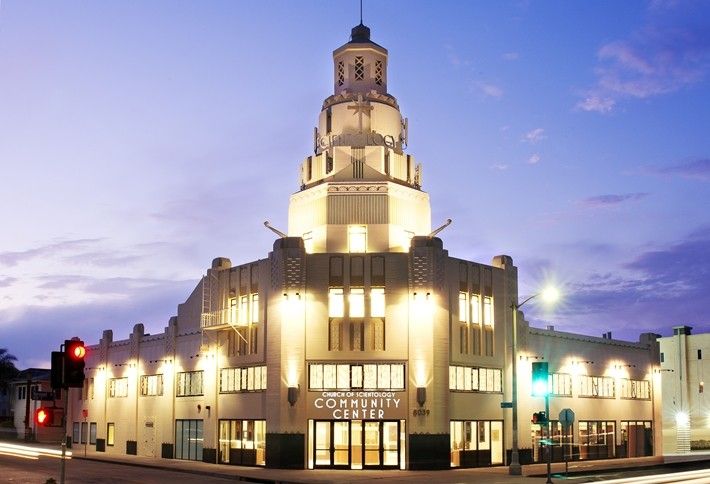 Pre-Church History: The Art Deco building was built in the 1930s and was a jewelry store until it was abandoned in 1999.

Purchase:Purchased in 2007, a fight with the city over the property lasted for several months. The city wanted to use the property for mixed-use housing or retail space, the Church outbid it during an auction.

Use Today: The Community Center features much of the typical fare of a Scientology property (a chapel, a detox center, and so on), a 380-seat event hall named in Hubbard's honor, and a cafe and lounge. 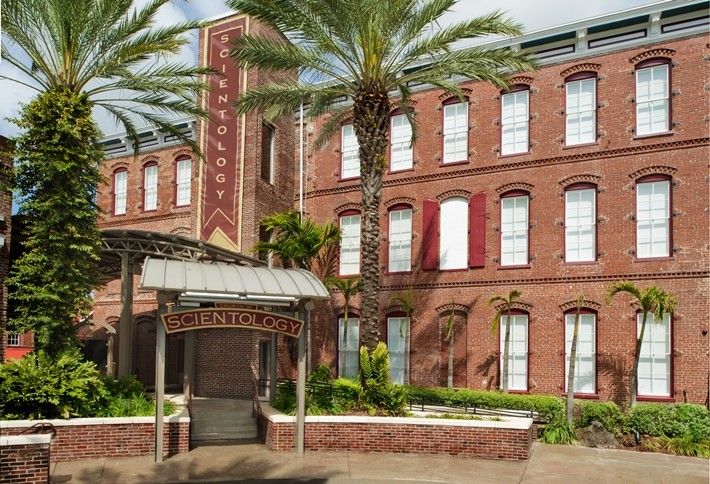 Pre-Church History: In 1886, Vincente Martinez Ybor, a Cuban immigrant fleeing the Spanish government, built this cigar factory, hoping to develop a community that would flourish around his industry. Over the next few decades, Ybor's factory would grow to be the largest in the world. The area attracted Hispanic, Italian and German immigrants, and grew into a thriving community as Ybor built streetcars, breweries and other factories. The most famous event occured in 1893 when Cuban freedom fighter and poet Jose Marti delivered a series of speeches in support of Cuban Independence.

Purchase: The Church purchased the factory for $7M in 2010, with renovations reportedly costing about $6M.

Use Today: A typical Church of Scientology, with a filming room, Hubbard exhibit, lecture halls, etc.