Hazelnut spread maker Ferrero Group, through its American arm Nutella USA, has jumped into the pop-up hotel game, opening Hotella Nutella in Calistoga, California, for a single weekend in January. 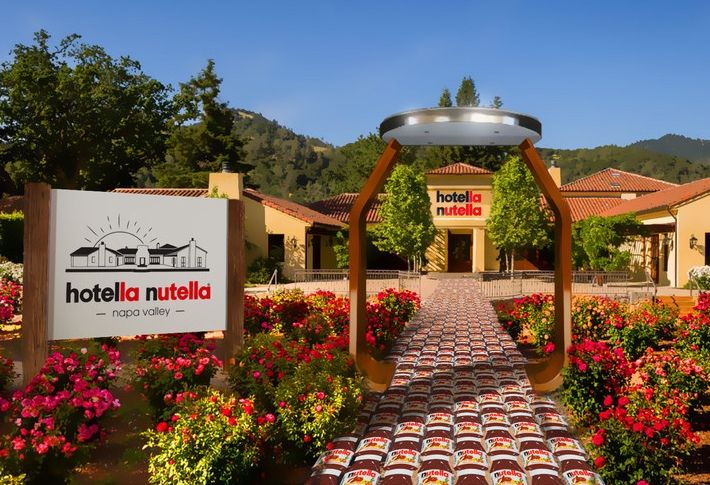 According to the company, Hotella Nutella will feature larger-than-normal jars of Nutella, hotel items and signage inspired by the spread, and celebrity chefs on hand to prepare Nutella-oriented dishes.

Though the pop-will be in the Napa Valley region of Northern California, Nutella hasn't specified whether it will be a temporarily repurposed hospitality property or another type of property. In this case, the pop-up is more of a sweepstakes prize than a property opened to the public for a short time.

To win a stay at Hotella Nutella, members of the public needed to submit a short video extolling how much they love the product, which Nutella USA then judges and narrows down to three winners. The deadline has passed, but no winners have been announced yet. No one else will stay at Hotella Nutella that weekend.

The property was an existing Palm Springs, California, hotel of about 70 rooms temporarily made over into a Taco Bell-themed hotel. In that case, Taco Bell opened up the hotel to paying visitors for a few days, and reportedly sold out all the rooms in minutes.

Other branded hotels will be more permanent than these food-oriented pop-ups. In Abu Dhabi, for instance, entertainment conglomerate Warner Bros. has started work on The WB Abu Dhabi, which is slated for completion in 2021.

Miral Asset Management is developing the 250-room hotel in partnership with Warner. The property will be next to Warner Bros. World Abu Dhabi, an indoor theme park that opened last year that Miral also developed.

The WB Abu Dhabi will include common area and room decor inspired by various Warner Bros. movies and TV shows, Hotel Business reports. It will be the first Warner Bros. themed hotel anywhere in the world.