Why Your City's Next High-Rise Could Be Made Of Wood

As steel, concrete and glass came to dominate cities’ dense cores, wooden construction was largely relegated to single-family houses in the suburbs. But a push for sustainable and aesthetically pleasing construction materials — and some well-timed updates to building codes — could bring wooden construction back downtown. 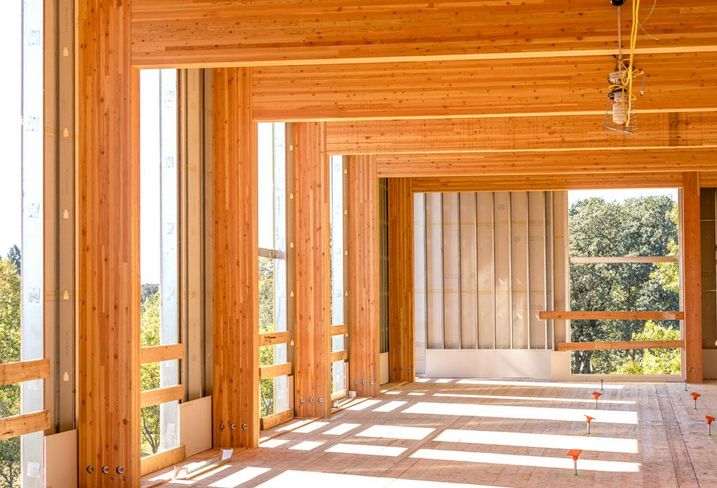 Buildings constructed with wood were long constrained to a few floors, but in December, the International Code Council voted to ease restrictions on height, allowing construction up to 18 stories with mass timber, an engineered material made of wooden planks bonded and pressed together into immensely strong and lightweight beams.

The code updates will go into effect across the nation in 2021. In Oregon and Washington, state governments have already passed their own sets of codes, and construction of large mass timber buildings has been underway.

“When you step inside a wood building, it just feels good — it’s a very human product,” said Christopher Evans, an operations manager and head of the mass timber group at Swinerton, one of the nation’s largest contractors. “But there’s a whole host of other reasons the material is making a comeback, from cost and timeline savings to sustainability.”

Underlying the boom in mass timber construction is a host of technological advances. While wood framing has been the preferred material in single-family homes for centuries, new materials like cross-laminated timber, or CLT, and glulam, short for glued laminated timber, have recently come to market.

In 2018, Swinerton completed the headquarters for First Tech Federal Credit Union in Hillsboro, Oregon; at 156K SF, the building is the largest CLT installation in the nation. Since that project, numerous clients have approached Swinerton asking about mass timber. Evans said the Swinerton team took it upon themselves to become the nation’s experts in wooden construction. 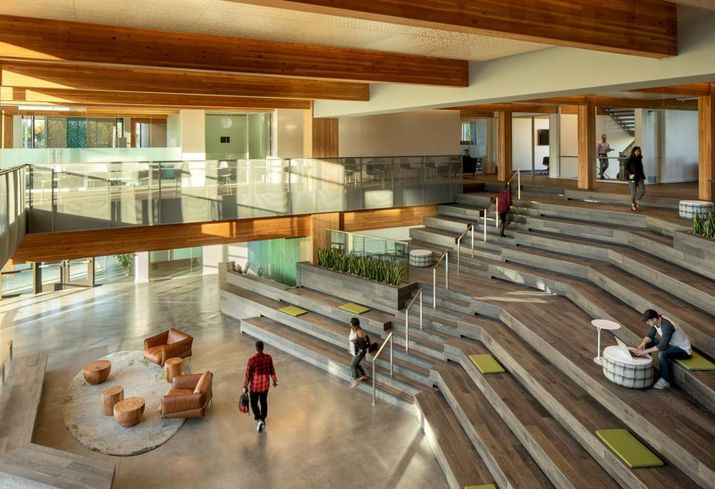 “We decided to do as much research into the feasibility of mass timber as we could,” Evans said. “The company concluded that mass timber is definitely more than a niche technique, that this could be a serious competitor in construction. We’ve been building out the mass timber team since the Hillsboro project. We now have a dedicated group focused on mass timber in the commercial construction market.”

Evans noted that a number of catalysts have coincided to bring mass timber into the forefront of the national construction conversation.

First is a push toward sustainable building materials. Though it may seem like cutting down trees would not be the most environmentally friendly way to erect a building, wood is a renewable resource, and mass timber construction has far lower carbon emissions than concrete and steel construction. CLT and glulam construction have become especially attractive for universities and municipalities that want to demonstrate a commitment to sustainability.

Next, mass timber construction can significantly reduce the timeline of a project, and consequently, its budget.

“When you use timber, you don’t have nearly as much concrete to set on-site, so most of the work can be prefabricated,” Evans said. “Also, because the building is so much lighter, you’re able to pour smaller foundations. On a decently large project, you can reduce the project schedule by 20% to 25%.”

Part of that time is also saved because electrical, plumbing and mechanical work does not have to wait for concrete reshoring, and can happen immediately after the timber goes into place. 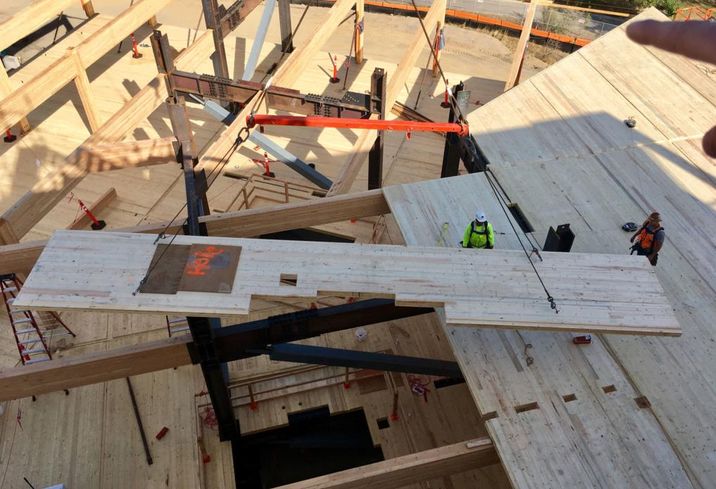 Finally, the search for unique office space has pushed tenants, and thereby developers, toward mass timber construction for its aesthetic appeal. The interior of a timber building feels bright and open, as opposed to concrete buildings that can feel cramped or claustrophobic, Evans said.

The first wave of progressively minded developers began exploring mass timber as a means to attract higher rents from tenants willing to spring for eco-friendly, bright office space, Evans said. Now, a second wave of developers is getting on the bandwagon because they see their competition filling up their buildings and want to join in.

“Timber construction makes sense for where we are in the world, in terms of lowering emissions and making office spaces more productive,” Evans said.

Most of the calls that the Swinerton Mass Timber team fields are from developers who are wondering if timber construction could make sense for their next project. But the cost viability of timber projects is not a simple question.

This feature was produced in collaboration between Bisnow Branded Content and Swinerton Mass Timber. Bisnow news staff was not involved in the production of this content.