Joseph Daniels is unlike anyone you’ve ever met in the world of real estate and construction. At the age of 27, he has already been backed by one of Europe’s richest families and a hedge fund titan, met Indian Prime Minister Narendra Modi to discuss tackling the global housing crisis and built houses on two continents.

He wants to turn his company, UK-based Project Etopia, into the Tesla of housing, by which he means building high-quality, affordable homes that create energy rather than putting carbon dioxide into the air.

It may sound overly ambitious, but then you factor in Daniels’ background. He became homeless for the first time at 15, and has been homeless on four separate occasions. His mother had mental health issues and his father was physically abusive.

He has no formal educational qualifications, but taught himself disciplines from thermodynamics to electrical engineering to architecture, and has invented or co-invented technology that is now being put to use in the smart, energy-efficient modular homes his company is building from two factory sites in the UK. 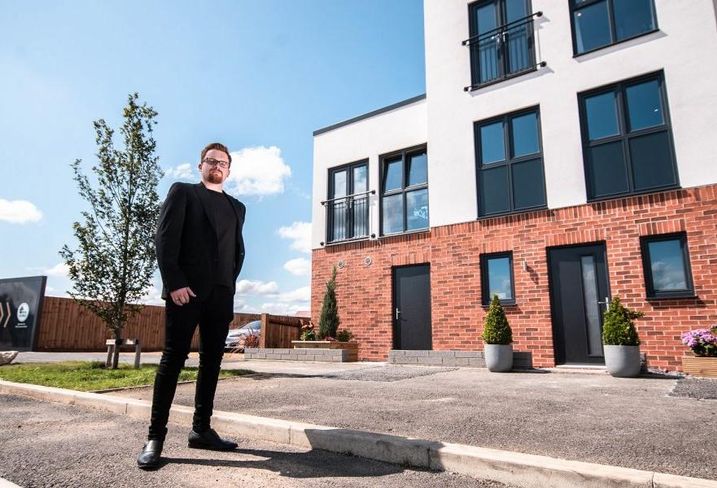 He is channeling his experience of poverty and suffering into creating the kind of company he thinks can make a difference for society and the planet. He wanted to have his own company producing completed houses by the time he was 30. He is ahead of schedule.

“I want us to be a global energy, construction and intelligent technology company,” he told Bisnow in an interview at the company’s offices in the Millbank Tower just west of the Palace of Westminster. “I want people to say Google, Apple, Tesla, Etopia.

“Tesla has taken something that we use in one way and have known for a hundred years and shifted how we use it and view it, and in that they set the benchmark. We are doing the same thing.”

In practice that means the creation of a panel-based modular housing company that has invented its own technologies in different areas to try and make homes that are as energy-efficient and technologically advanced as possible.

Daniels began the process of setting up the company at 23, and in 2018 he received £2M of seed funding from Lord Stanley Fink, the former chief executive of hedge fund manager Man Group. Fink also became Etopia’s chairman. 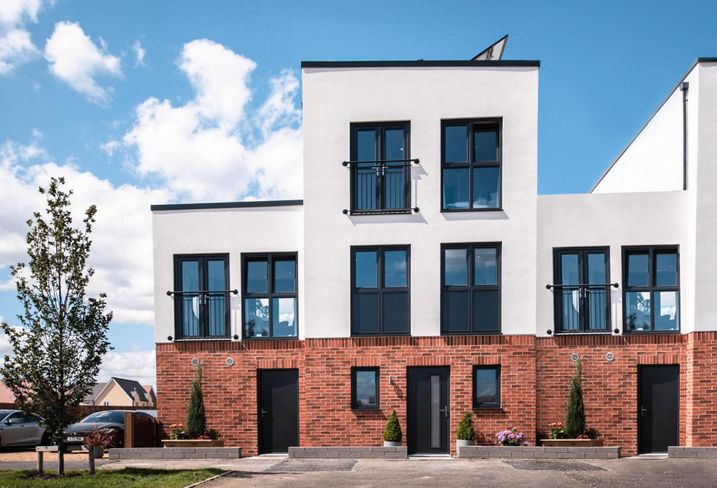 That initial capital was used to set up a production facility in Cheshire and fund the purchase of the company’s first site, in Corby, in the Midlands region of the UK. Etopia has also built a prototype demonstration home at the UK’s Building Research Establishment just north of London.

The company announced in September that the billionaire Reuben brothers, who made their fortune in metals and built a huge property empire, had provided a further £19M of funding.

Now the first two of the 47 homes on the Corby site have been completed, the units are selling and residents are moving in. The scheme comprises two-bed apartments plus three-, four- and five-bedroom homes, which sell at a slight premium to traditional homes in the area. Etopia has received mortgage offers from major high street lenders like Barclays, which, combined with the sales, can be seen as proof they are commercially viable.

With the first small steps completed, Etopia — which stands for environmental and economic utopia — is looking to scale up this year, and also enter America. 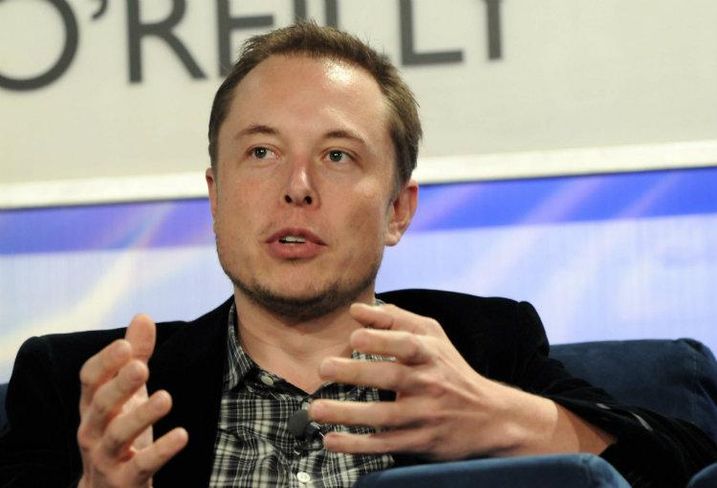 Its main production facility has the potential capacity to build up to 2,000 homes a year, and Daniels said the company is looking to buy other sites itself, or work with other site owners to build schemes on their behalf. It has hired James Pikett, formerly head of development at Berkeley Homes, one of the UK’s largest housebuilders, as development director. As well as developing on individual sites, Daniels also wants to branch out into building larger master-planned communities.

The company is in discussions with the University of California, Davis to potentially build another prototype home, which Daniels hopes can be a springboard into launching in the United States.

“We want to be in the U.S,” he said. “We’re going there to show that we can build the best houses in the world, and work to deliver them.”

Etopia has invented its own technologies in key areas, which Daniels said allows it to build energy-efficient smart homes. These include the superstructure of the home, which is hurricane- and flood-proof, lightweight and constructed to double passivhaus standard, meaning heat doesn’t easily get in or out. It has battery technology housed in architectural dead spots to hide it away. It has designed solar tiles, which Daniels said are like those manufactured by Tesla only more affordable. Etopia also created a system called E-Smart, which links up all the systems, such as heating, lighting and technology, using its own interface. All of the components for that system will be built out of recycled ocean plastic.

“Why I chose those specific areas, they are the key products you will need to build the house of the future,” he said.

While the average home emits 6 tonnes of carbon a year, the solar and battery technology combined with the energy-efficient design means Etopia’s homes have been certified as producing -0.7 tonnes of CO2 — they produce more energy than they consume, meaning it can be sold back to the grid.

Again, the scale of his ambition is clear.

“If you build a million homes [that are carbon positive], think about the amount of CO2 you are not putting into the air, and the impact that has on people’s lives,” he said. 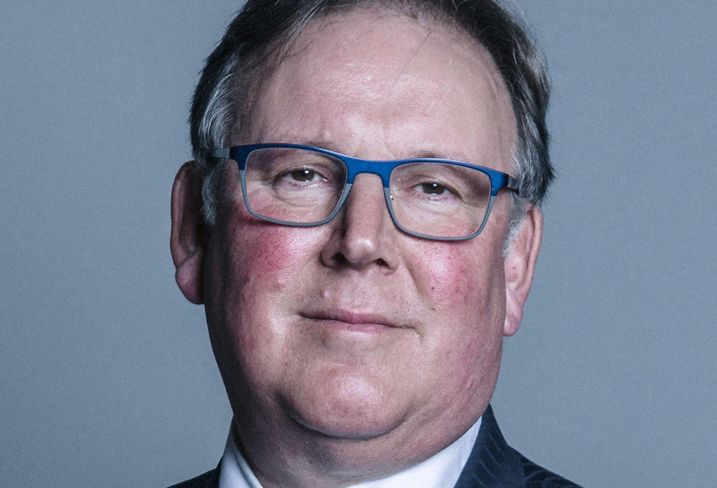 Daniels is confident the company has the ability to scale successfully. While it might sound complicated, he said the company’s homes were built so that the process of assembling them could be easily understood by someone who had never done it before. With an eye for narrative, Daniels and Etopia went to a rundown area of Windhoek, the capital of Namibia, and taught a group of locals how to assemble one of its homes. If they can do it, anyone can, he said.

“We trained six people from a shanty town to build a completed unit in two weeks,” he said. “They put the superstructure up in three hours. This unit was 63 square metres, had two bedrooms, a Scandinavian style kitchen, is 10x energy positive, had solar installation, mechanical ventilation, triple glazing and smart lighting. If I can train six locals who can’t read and speak English to do it in two weeks, then it becomes about, how many can you manufacture?”

Daniels and Etopia were invited in March by the Indian government to participate in the Global Housing Technology Challenge being hosted in Delhi, where he met Modi, the prime minster, to discuss technological solutions to the country’s housing challenges.

“He wanted to know how to scale and build houses without them falling down,” Daniels said. “There are so many issues in India, they can’t do things in conventional ways as they have water issues, they need a fast quick solution that is sustainable and that will pass the test of time.”

The story of how Daniels got to this point is remarkable. When he was setting up the company, he had no money, but racked up credit card bills to tour factories in China making technology he thought would be needed to build his vision of a smart, sustainable home. How he went about this speaks volumes about how he thinks.

“I went on Alibaba and spent six weeks going through technologies that I thought were interesting, reading the product reviews,” he said. “Then I emailed them, asked for samples, used Google translate to translate the responses back from Chinese, and then said, can I come and visit you?”

He found a translator and off he went, touring lithium battery factories and other such facilities.

“I can talk my way in and out of many situations.” 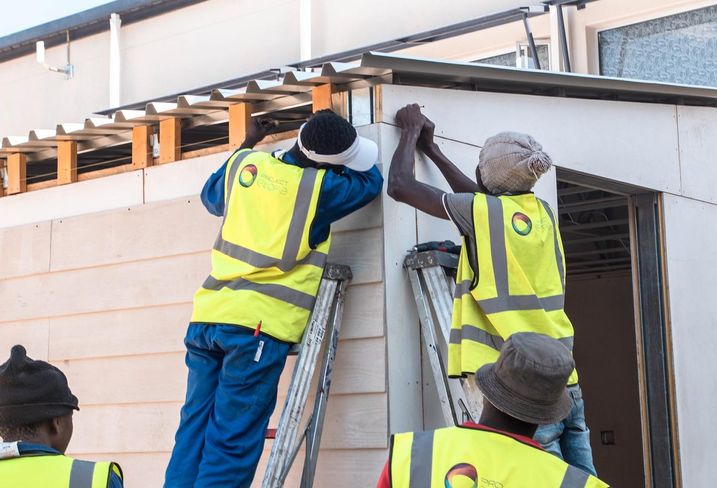 In a similar manner, he taught himself the disciplines he thought he would need by reading up about them online, from electrical engineering, to thermodynamics, to architecture, and brand and marketing. He believes being self-taught helped him to think differently to the conventional manner, which he said is much more linear and siloed.

“There’s a stigma, but I can be a leading light to show, of course there’s a place for academia for young people, but also you don’t have to choose a select path,” he said. “Also that you can combine sectors. Not many people would combine architecture with smart technology, energy technology and Internet of Things because it wouldn’t be in their remit. They are just building the building, they wouldn’t think about the programming and the smart technology.”

But before all this, his background was incredibly tough, something about which he speaks openly and candidly.

“I lived on the streets four times, my mum was sectioned when I was 15, so where did we go? I was living in a women’s refuge when I was a kid,” he said.

He said his experience had a very direct impact on what he wanted to do with his life. It is why he wanted to build the houses that he has, and why he wants to undertake social impact projects alongside Etopia’s housing schemes.

“My experience is definitely why I am doing what I am doing,” he said. “There is definitely enough money in the world to feed everyone. We have 2 billion people living in poverty, 4 billion in subpar housing. We have the ability to build greatness. Everyone has the ability to have access to an internet connection and yet they don’t have a quality home. And I want to try and help solve that burden.

“We want to crate next generation social housing. Why doesn’t someone living in poverty deserve to live in a beautiful smart home? We’ve already designed a system that can deliver that kind of housing, in a way that is cheaper than conventional methods.

“It’s not about what I learned, it’s about what I suffered, and what I didn’t get to experience because I was poor. That is a driving factor behind why I do what I do. It’s the ability to give people access to housing, people who haven’t done anything wrong, they are just in a more impoverished situation.”

There is a clear social mission in what he is doing that comes from a very personal place. And the company will continue to evolve as it learns, he said, similar to his own path. Daniels said as Etopia grows, it will keep pioneering new technologies and processes, to keep making its product better. Which brings us back to the Tesla analogy.

“We were a housebuilder, trying to build the house that changes the world, but we are not just a housebuilder anymore,” he said. “A Tesla isn’t just a car, it is a computer with a self-driving neural network. We’ve become something unique, which is what I always intended.”