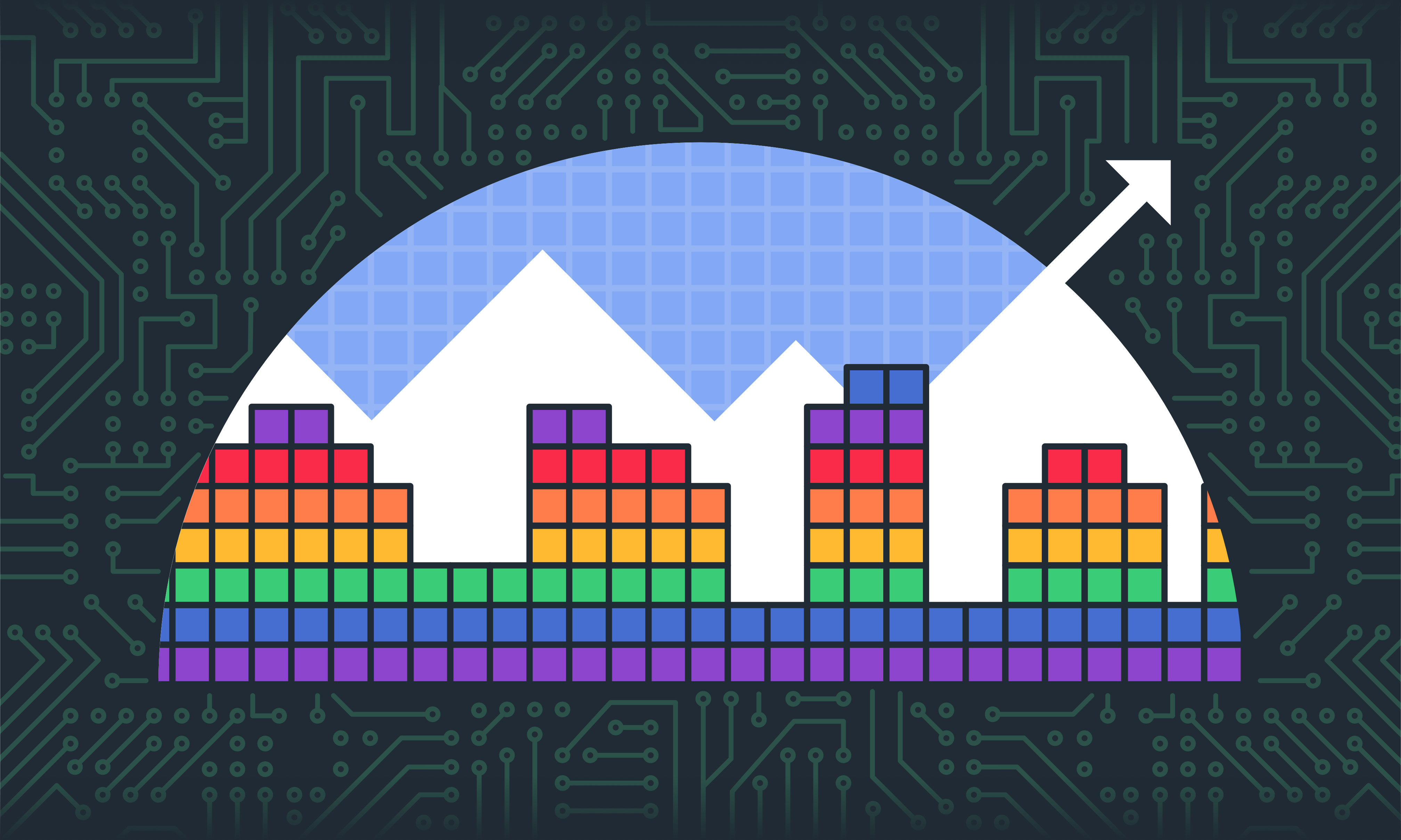 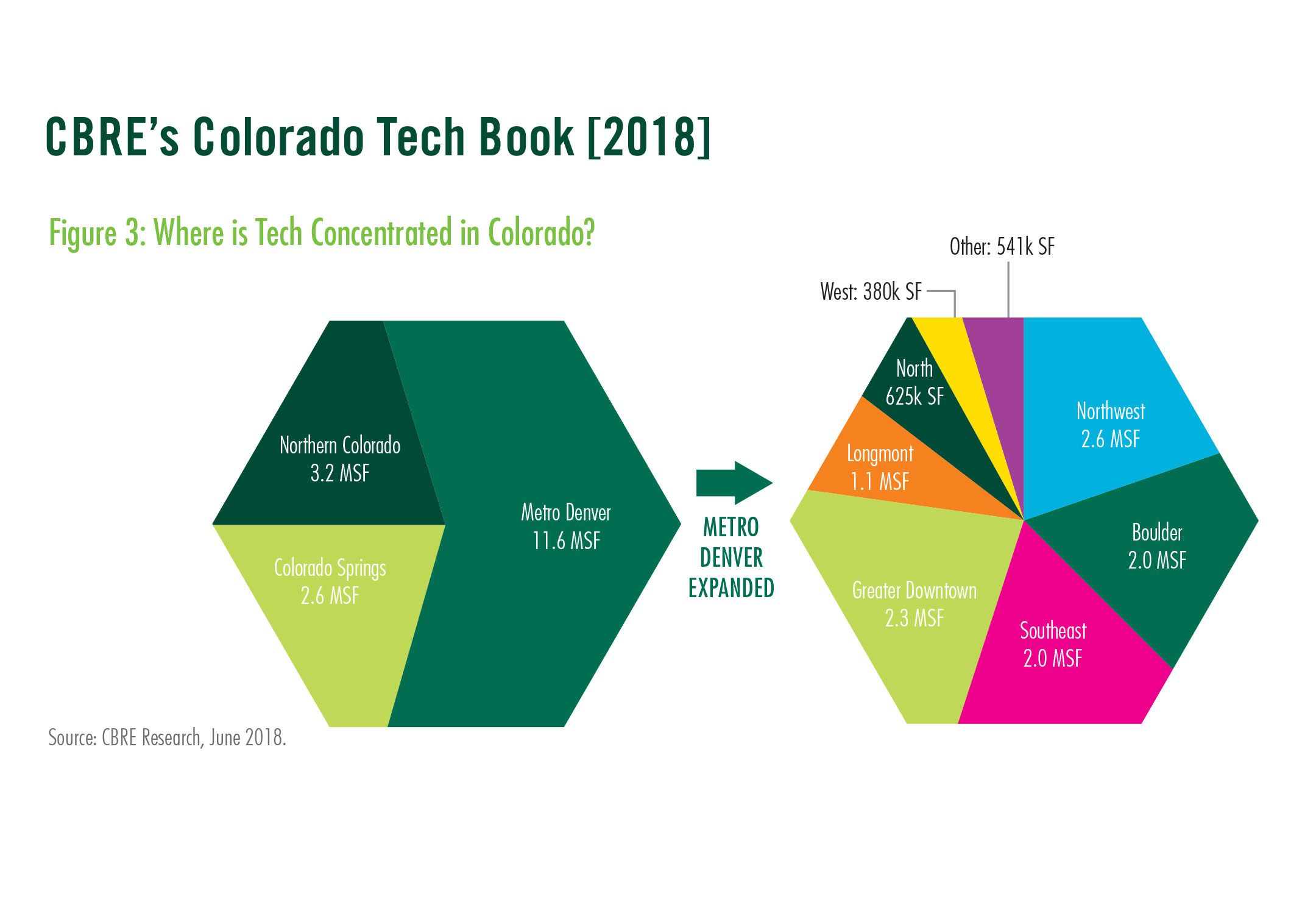 Courtesy of CBRE
Where tech is concentrated in Colorado

Tech companies that gravitated toward LoDo when they opened their Denver offices are finding that as they grow, they have to move out of the funky neighborhood’s historic buildings and into more corporate-style space at the other end of downtown.

Late last year, software maker Xactly moved from Blake and 19th streets into two stories in the Chase Bank building at 1125 17th St. The company, which has grown its Denver headcount by 300% to 220 employees in the last year, occupies 60K SF in the building and has an option for a third floor to accommodate up to a total of 500 people.

Other examples of rapidly growing tech companies relocating to office towers include SendGrid and Ibotta Inc., which both moved into former CenturyLink space at 1801 California. 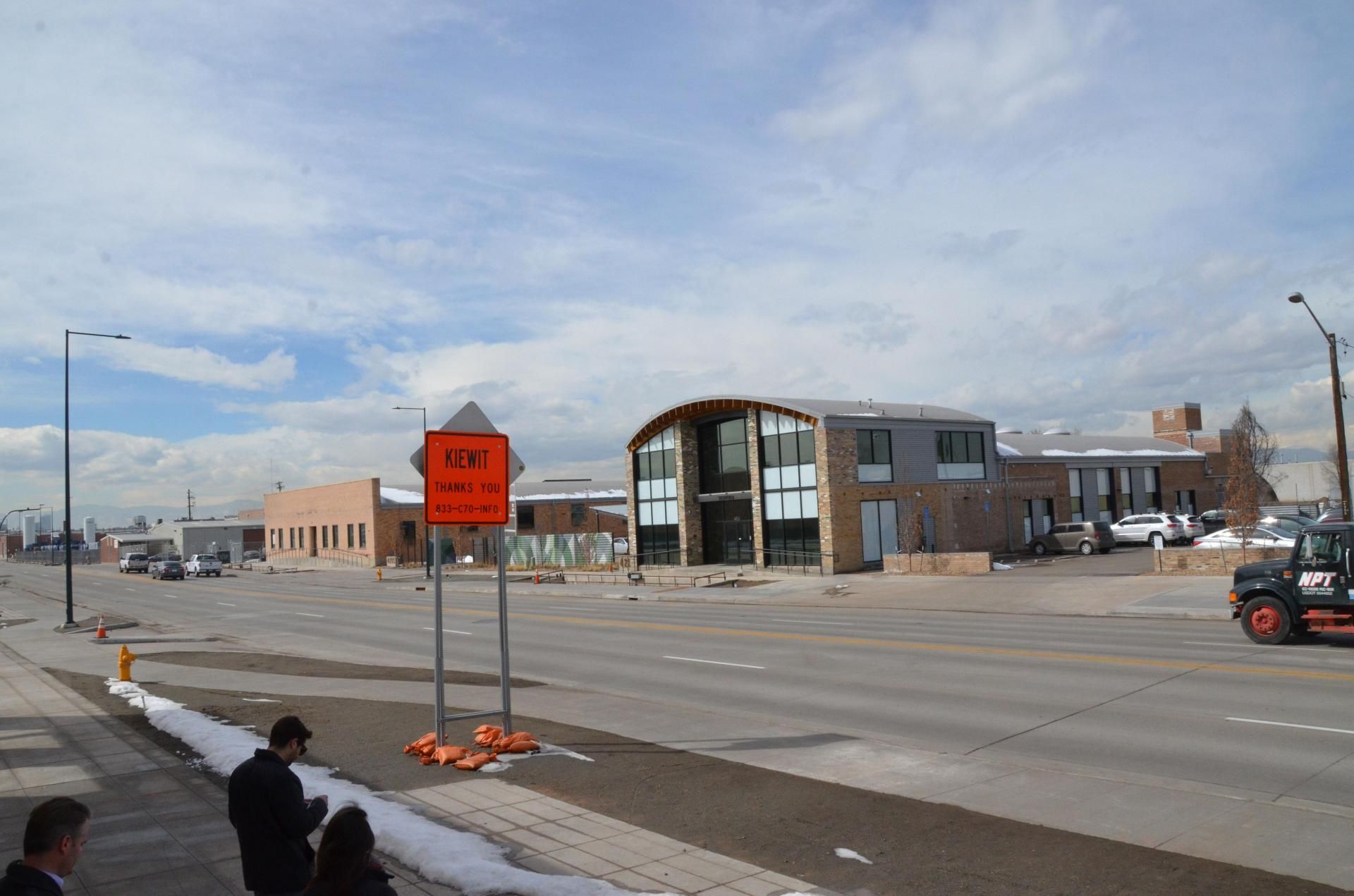 Bisnow/Margaret Jackson
Two buildings flanking a parking lot on Brighton Boulevard in RiNo could be an attractive campus for a technology company.

“The landscape on that side of town has fully shifted,” Colliers International Vice President Matt Ball said. “It’s not just law firms and oil and gas and financial services. WeWork taking that space at Wells Fargo solidifies diversifying that end of town.”

With that shift comes new demands on design in these more traditional spaces. Many tech companies continue to be drawn to open and collaborative office space, a trend that other types of businesses have tested over the last 10 years as they strive to design offices that people enjoy being in every day.

Some companies seek a balance between open, collaborative space with breakout seating areas for employees to gather and offices that provide privacy for sensitive or confidential meetings and phone calls.

“People either love it, or they hate it,” CBRE Senior Vice President Alex Hammerstein said. “Open workspace doesn’t always work for the introverted or people who really want to get things done. You need those breakout areas — those rooms that are kind of your safe zone.”

Over the last six years, technology companies have accounted for about 30% of the tenant deals done in downtown Denver,  Hammerstein said. About 70% of those deals are companies from both coasts that have decided to open an office in Denver and have taken about 1M SF, according to CBRE’s Tech-30 2018 report released in October.

“We’re seeing those companies that put a flag in Denver are now growing,” Hammerstein said. “Now they’re all growing and taking more space.”

As they expand around Denver, tech companies continue to look for the coolest neighborhoods in an effort to attract the best employees. And now that there is more office space under construction, RiNo is likely the next frontier for tech companies looking for space.

Newmark Knight Frank Senior Managing Director Andrew Blaustein estimates that within two years there will be 1M SF of tenant commitments in RiNo, downtown’s northern neighbor. He also expects there will be a high-profile corporate campus in the neighborhood that is likely to be occupied by a tech company.

RiNo has become increasingly attractive as more restaurants and bars have opened and residences have been built. The neighborhood is also on the light-rail line, making it easy to get downtown or to Denver International Airport.

Westfield Co. is redeveloping the 14-acre North Wynkoop, a former industrial warehouse and distribution campus in RiNo, with up to 1M SF of modern and historic office space, about 500 residential units, a hotel, restaurants, bars and coffee shops and a 3,950-person-capacity music venue — The Mission Ballroom — to be operated by AEG Presents. 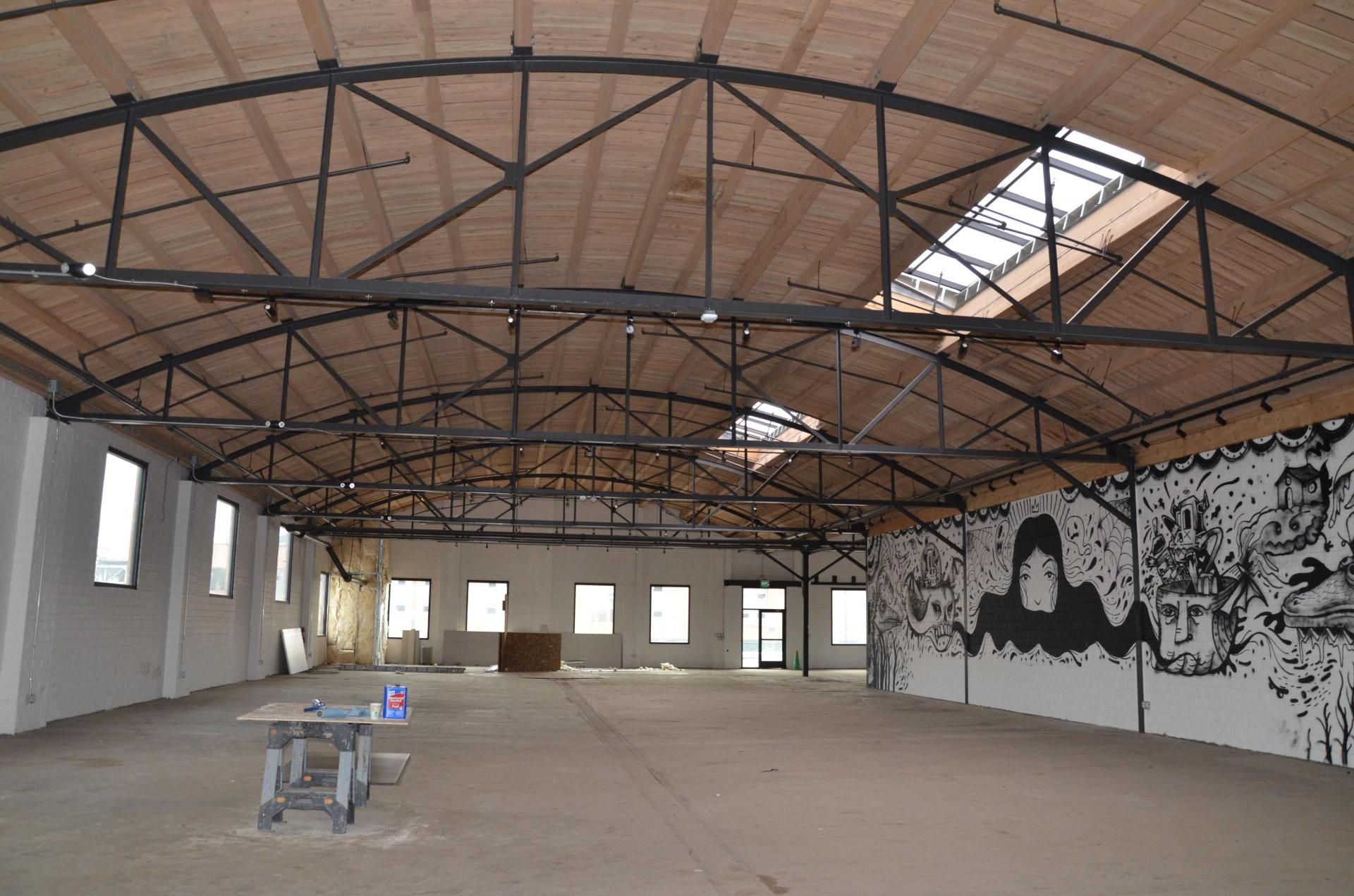 Westfield recently relocated to a 10K SF building across the street from North Wynkoop and owns another 14K SF building and parking lot next door. If a tenant wanted to create a campus environment in both buildings with a courtyard in between, Westfield would relocate its offices to North Wynkoop.

“This is a great tech campus because you’ve got this great cultural vibe,” Newmark Knight Frank Managing Director Matt Davidson said. “Once all the cool kids start going out there, everyone will follow.”

In addition to Westfield’s North Wynkoop project, several institutional-grade investors are working on projects in the area.

Mass Equities Inc. and AECOM Capital are developing a 7.8-acre site with about 522K SF of new construction at 3060 Brighton Blvd. The $200M first phase of the project will include the repositioning of an existing building into a creative office building. In addition, Mass Equities and AECOM are planning to build about 480 apartment units and 64K SF of new creative office space over 33K SF of retail. 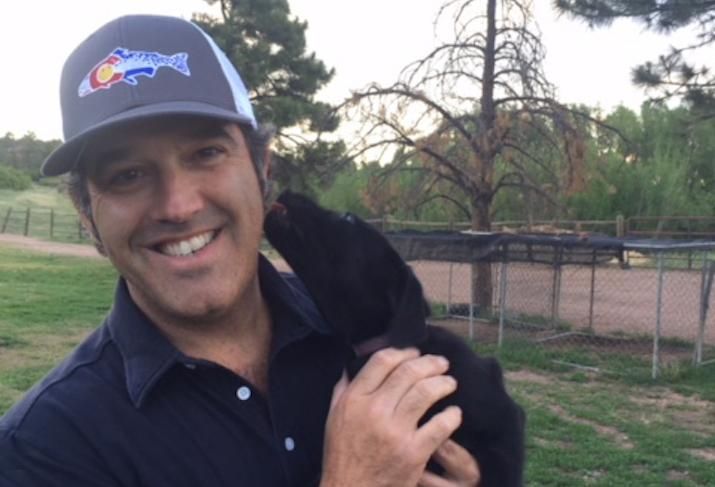 Tech companies are drawn to Denver because of the city’s reasonable cost of living and its young, educated talent pool. It is also more economical to rent office space in Denver than top coastal cities.

Buoyed by double-digit tech-sector employment growth, Denver ranked ninth for office rent growth among the Tech-30, up six spots from 2017. But while Denver’s average office asking rents rose 9.6% from Q2 2016 to Q2 2018, reaching $27.66 in the second quarter of 2018, they are still well below the nation’s top tech HQ markets, including San Francisco and New York City, which have office rents of $75.54 and $74.35, respectively. 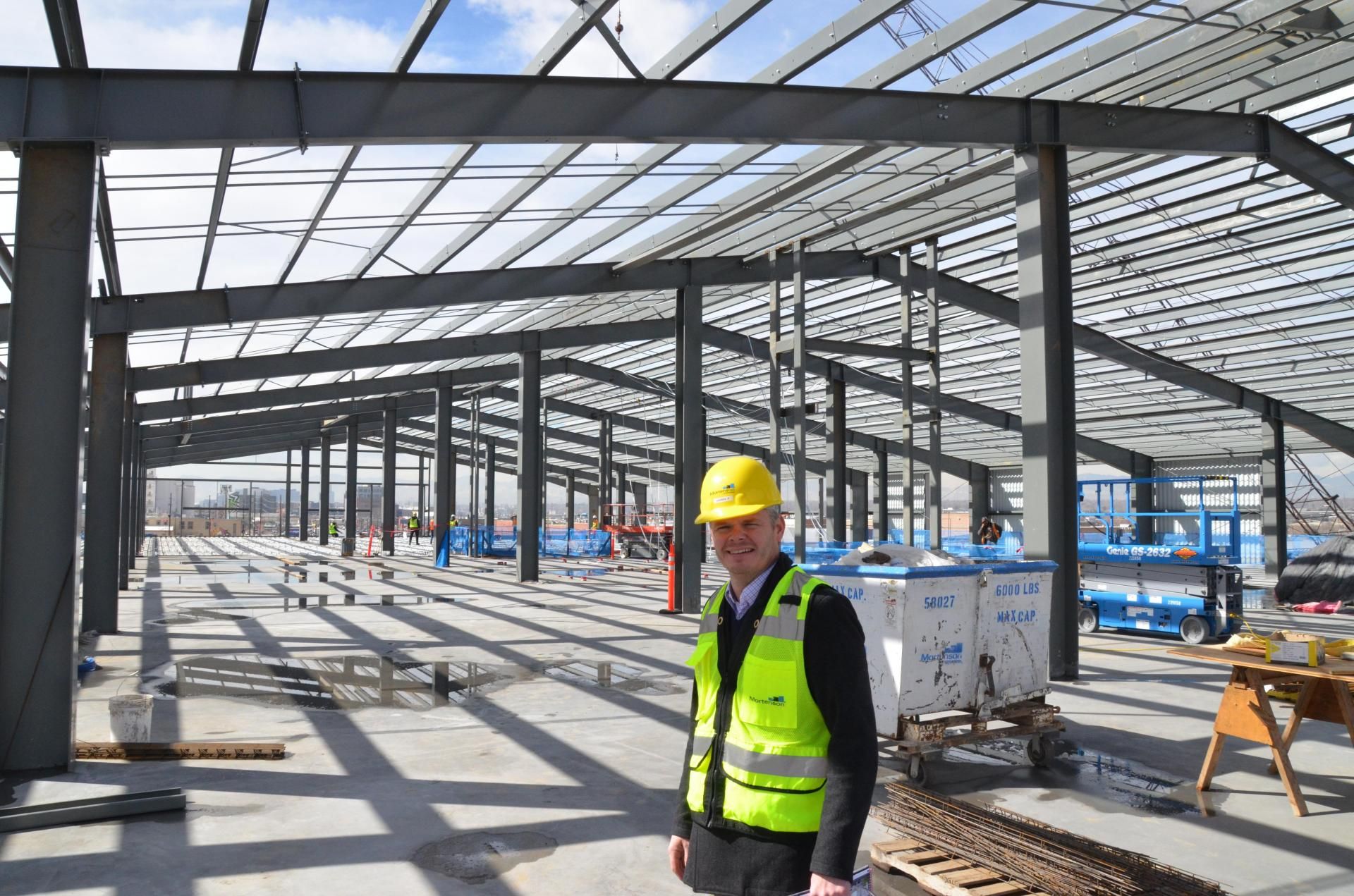 Bisnow/Margaret Jackson
Newmark Knight Frank Managing Director Matt Davidson leads a tour of 4180 Wynkoop, which already has a commitment for part of the third floor.

As more tech companies move in, the amenities being sought in office buildings are shifting as well.

Other than the fitness centers, coffee shops and bike racks seen in many of the new office buildings going up around the city, Hammerstein said many landlords are touting coworking space as an amenity. WeWork has leased space in some of Denver’s most prestigious buildings — think Tabor Center and Wells Fargo Center — and by the time all eight of its locations are open by late 2020, it could be the biggest office space user in the city, surpassing Fortune 500 dialysis company DaVita.

“It’s an amenity their tenants can choose if they need some extra space,” Hammerstein said of coworking. “The savvy user/occupier looks for buildings that have those things.”

A Company's Culture Is Key To Office Design