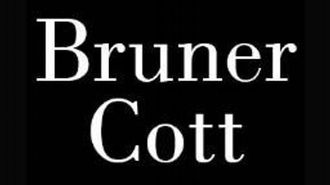 For Bruner/Cott principal Scott Aquilina, his future was written in the stars.

Or at least, his palm.

"When I was in the second grade, I was attending the school fair and a gyspy read my palm. She told me me I was going to be an architect. Naturally, I thought that was a wild assumption. I didn’t even have any architects in my family or know much about the profession,” Scott tells us, trying not to laugh.

“I decided to run a quick experiment. After a quick trip to the face painting station I thought I’d be completely unrecognizable. I came back and she gave me the same reading. Obviously, she wasn’t fooled but she left me with a lasting impression. From that moment on, I decided to just run with it."

Scott went on to Princeton University, where he majored in art history as an undergrad, before returning for his architectural degree as a graduate.

Despite the impressive pedigree, Scott (and the fortune teller’s) plans were almost thwarted. He completed his education in the late '90s, when the nation was tilting downward into a recession thanks to the war in Kuwait.

“I bounced around a bit and then ended up at Cesar Pelli’s office in New Haven. Most of the younger folks, like myself, were just building models of office towers. I wanted to accomplish more than that.”

Scott tells us he always wanted to be in a position where he would not only design a building, but also get to see them built.

“I was in my 30s by the time I really had that opportunity,” he says. “A friend of mine had a firm in Watertown Square, and they hired me to work on the Albany Institute of History and Art. I had a lot of independence on that job and it was an opportunity to develop my approach to design and managing client relationships. I feel a lot of ownership for the project, and it would set me up for my big break immediately afterwards."

After impressing ABA Architects with his work in Albany, Scott joined its team for nearly 15 years and led design teams for performing arts projects at Williams and Wellesley and—more recently—for the new Student Life and Performance Center at the New England Conservatory of Music.

His successes out of that office earned him an opportunity he couldn’t refuse to become part of the leadership team of Bruner/Cott.

“I have been really, really fortunate,” Scott says.

His current project is a new home for the popular Children's Museum and Theater of Maine.

It’s part of a new development and the building is taking shape along the Fore River. It is a stark contrast from the museum’s former downtown location.

“It’s a brand-new building,” Scott tells us. “It has a beautiful, spacious lobby and one new component being developed is theater for kids, by kids. This means that teenagers run the program and produce shows for younger children to enjoy."

Scott is very excited to see the finished product of the museum but he tells Bisnow there is still something on his bucket list: designing a dynamic indoor/outdoor performing arts center is his ideal future endeavor.