$1.6B New Quincy Center To Get Building 1

In three weeks, construction will start on the first building of the New Quincy Center, a $1.6B, 3.5M SF project being developed by the Beal Cos, Street-Works Development, and the City of Quincy after eight years of planning. (We usually stop making plans after eight minutes, so congrats.)

Beal SVP Steve Faber (secondfrom left with JLLs Steve Lynch, AHPs Christina Herron and ICON Architectures David Stockless) tells us that after a few months of site work, construction will starton the first three buildings of what promises to be Massachusetts largest development--the rebuilding of Quincys deteriorated center. By 14, he expects first occupancy in Phase 1, called Merchants Row: 289 apartments, 35k SF of new retail, and 25k SF of offices. Once complete, it's 1.2M SF of offices, 610k SF of retail, up to1,900 residences, a hotel and parking for 5,000 vehicles, says Steve whom we snapped at NAIOPs event yesterday at One Financial Center. 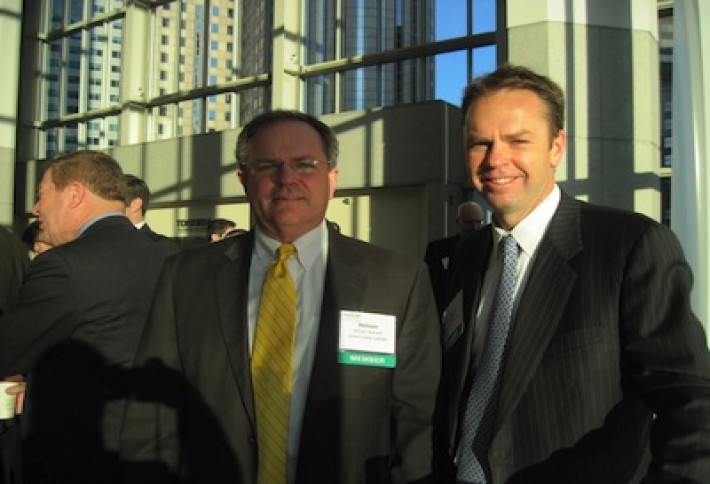 JLL Boston leasing director Bill Barrack is with Sovereign Santanders Kip Sanford. Bills team will lease the offices; JLL also is an equity investor. Kip says that Sovereign/Santander wants to help finance the project that revolves around the citys strong credit rating and the Quincy Center Red line T-stop. The train puts residents, shoppers and commercial tenants about 20 minutes away from Boston and 30 minutes from Kendall Square in Cambridge. The central organizing element is Hancock Street that leads to the T stop. Mayor Koch, who will soon announce a cityplan to developin air rights over the stop, expects downtown to transform from a liability to an engine for growth.