Improvements at Two Allen and Three Allen Center are the next steps in Brookfield Properties' multiphase Allen Center renovation plan. The first phase transformed One Allen Center's lobby into a mixed-use, two-story glass facade in 2017.

Renovations at Two Allen Center will include a new two-story lobby, second-floor outdoor terrace and updated retail bays and tenant mix. Three Allen Center will get a renovated lobby and a new shower and locker facility. Both buildings will receive renovated elevator lobbies and elevator along with a new skybridge connection.

Morrison Dilworth + Walls and PDR will serve as the architects and Tellepsen as the general contractor. Construction is expected to begin in April and be completed in late 2020.

“We have taken a holistic approach for changes at Allen Center,” Brookfield Properties Executive Vice President Travis Overall said in a release. "Through improvements at the street level, the creation of more open areas — inside and out, more natural light within our lobby areas, and retail and hotel features, we are anticipating the needs of our tenants and the evolving office experience.”

Brookfield also announced plans in January to convert the former DoubleTree by Hilton hotel into a boutique hotel, dubbed C. Baldwin, inspired by "The Mother of Houston," Charlotte Baldwin Allen.

Check out the renderings of Two Allen and Three Allen Center renovations: 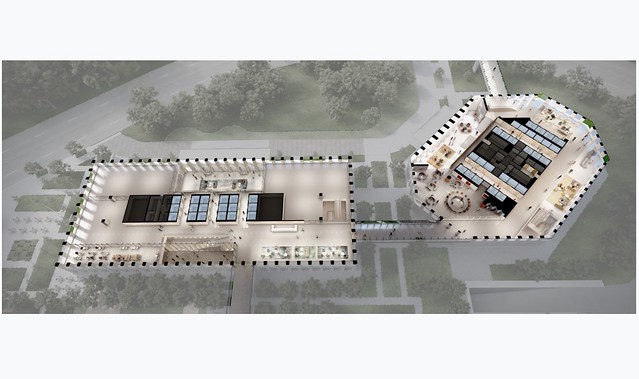