The construction boom in Chicago’s multifamily sector has stretched out for years, transforming its downtown and the surrounding neighborhoods, but as fears of a possible recession make lenders more cautious, 2019 looks like the year it will start to slow. 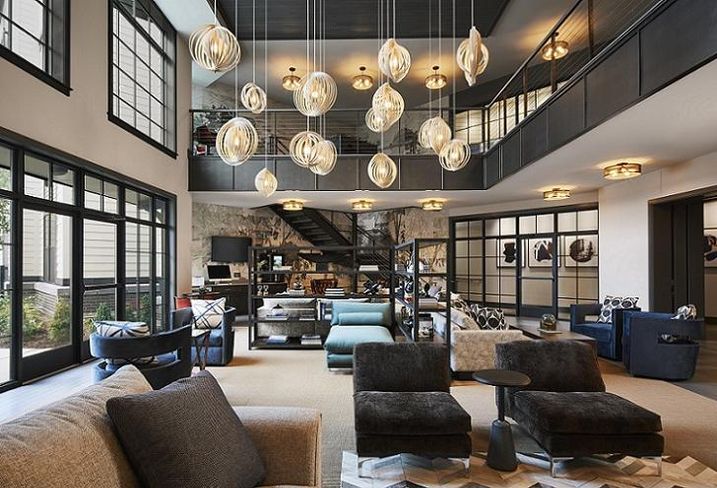 Experts believe new development is highly unlikely to crash or even seriously decline. Instead, cost-conscious builders will pick their spots with greater care, and start seeking out areas in the Chicago region, especially the suburbs, that were left untouched by the post-recession expansion.

Even though most of the stats on the U.S. economy look great, many lenders and investors have started factoring in a possible recession when they run the numbers on proposed deals, he said. Instead of assuming perhaps 5% rent growth, these days they are more likely to consider 2% growth more realistic.

“It’s getting tricky to do deals downtown, and even though development will continue, with these numbers it’s getting more and more difficult to make deals pencil and get projects out of the ground,” Bradley said.

Marcus & Millichap just published its latest 2019 outlook for the Chicago region’s multifamily sector, and the firm projects that developers will deliver about 7,800 new apartments in 2019, less than the roughly 9,000 completed in each of the last two years.

But for all the worries about a possible recession, the sector, in both city and suburbs, continued to perform well over the past year. Chicago’s urban vacancy rate fell 70 basis points to 5.8% from first-quarter 2018 to first-quarter 2019, with net absorption of approximately 5,900 units, according to Marcus & Millichap. During the same period, builders finished about 5,100 new Chicago units, with the highest concentration on the Near North Side.

In the suburbs, year-over-year vacancy dropped to 4.8%, with several northern submarkets, including Evanston and Lake County, posting decreases of nearly 100 basis points.

In the same period, average effective rents in the Central Business District jumped 5.9%, to $1,892, driven by strong gains in Class-A properties. Meanwhile, in the suburbs, rents increased 3.2%, to $1,239 per month.

Besides the overall decline in the number of units underway, the increase in costs is causing other market shifts.

“We’re going to continue to see additional development out in the suburbs since your dollars go further out there,” Bradley said. 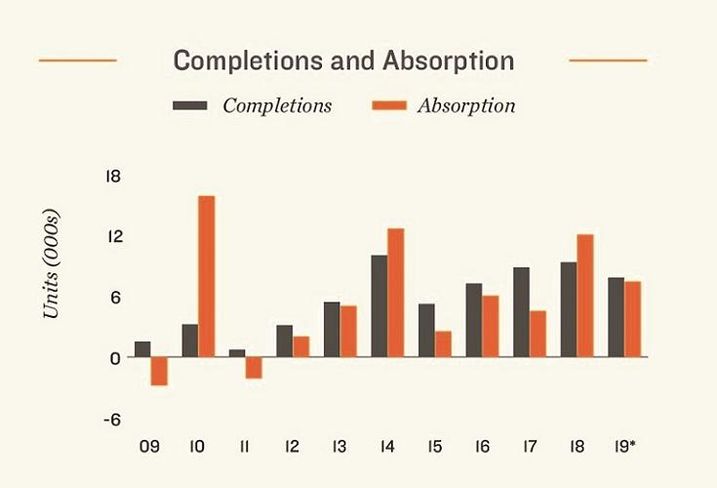 Although a majority of the units completed over the past year were in the city, in 2019 the suburbs will come out on top, according to the Marcus & Millichap report. The company forecasts that developers will complete around 3,400 Chicago units this year, and 4,400 in the suburbs.

Over half of the Chicago units are slated for the South Loop, an area that had received less attention than flourishing neighborhoods such as Fulton Market and West Loop during the boom.

“More than anything, the South Loop is just the next in line because a lot of opportunities elsewhere have been picked over,” Bradley said.

The suburbs’ growing strength can’t be attributed simply to lower costs. Bradley said many of these towns will benefit over the long term from an ongoing shift in lifestyle choices among millennials.

“We have all talked about millennials endlessly, and how they prefer living in cities, but as they age, the suburbs are where they are going to go, especially anywhere close to a train line that gets you into the city quickly and you can get around without a car,” Bradley said.

As demographics shift, however, developers won’t be able to build suburban units as they may have done in the past. Millennials who spent their formative years in the city, and became accustomed to having amenities, entertainment options and restaurants close by, will now demand these features even as they migrate to the suburbs.

“They are going to want a lot more than a pool and a gym,” Bradley said.

Architecture and interior design firm Morgante Wilson Architects recently completed amenity-rich designs for both city and suburban projects. It designed the interiors for 727 West Madison in Chicago’s West Loop, developed by Fifield Cos. and opened last year. It was also tapped to design and program the amenity spaces at The Atworth at Mellody Farm, a 200-unit rental community in northwest suburban Vernon Hills, developed by Focus and Atlantic Residential, that also opened last year.

Building amenities for the Vernon Hills property range from a swimming pool area with cabanas and a bocce ball court, to a yoga studio with Fitness on Demand technology, and a tasting room with a bar area.

“It’s very eye-opening for renters who are transitioning from a single-family home to an apartment to see these type of intimate community spaces,” Morgante Wilson co-principal Elissa Morgante said.

“Their address may be changing, but their lifestyle doesn’t have to.”