Could A Trail Network Breathe New Life Into Gwinnett Place? 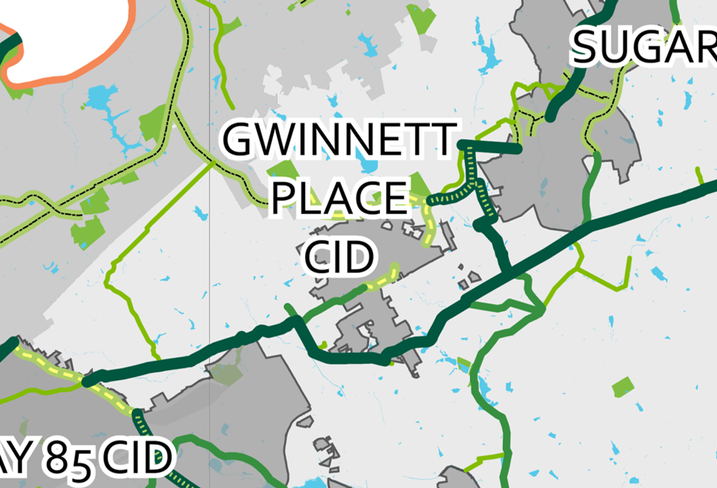 Courtesy of Gwinnett County; images by Kimley-Horn
A map of existing and proposed trails surrounding the Gwinnett Place CID.

The autocentric world of Gwinnett Place could be getting a pedestrian makeover.

A new initiative proposes to link together Gwinnett County’s hundreds of miles of existing walking trails and plots out a new trail network that would crisscross the county, with many connections running right through Gwinnett Place.

The network laid out in the Gwinnett Countywide Trails Master Plan would allow residents and visitors to travel between the county’s central business district, the surrounding suburbs and its various parks and green spaces. The trails would be a step toward creating a denser, more urban and more sustainable future for what will soon become Georgia’s most populous county.

“Our parks and trails are one of our greatest assets in Gwinnett County,” said Joe Allen, executive director of the Gwinnett Place Community Improvement District, which is committed to revitalizing the county’s central business district. “The offices and residences that border those green spaces are like beachfront property.”

Gwinnett County is already home to 134 miles of biking and walking trails. The challenge, Allen said, is that most of these trails fall within parks that can often only be accessed by car.

The new trail network would integrate already-built sections of trail into a cohesive system for cyclists, runners and walkers. Many of the proposed trails run off-road, along rivers and through Gwinnett’s untouched green spaces, while others are taking shape alongside roads and in existing rights of way.

The core network of “Signature Trails” includes the Piedmont Pathway — which would sweep west to east through Gwinnett Place and across the county — and the Loop Trail, which links Gwinnett Place with the Infinite Energy Center and points beyond. In addition to major trail systems, the plan also provides trail connections and spurs so pedestrians can find their way onto paths.

The Loop Trail Study is beginning its public outreach phase with a public meeting in early 2020 and an online survey for future users of the trail to examine the route and offer suggestions.

Though Gwinnett’s parks are award-winning, getting to them can sometimes be a struggle. Allen described a conversation he led with a global company whose North American headquarters is located at Gwinnett Place. After work, the employees love to go running in nearby McDaniel Farm Park, a preserve with a 1900s-era farmhouse, but entering the park involves jumping over guardrails and cutting across private property.

“They said, ‘We can see the park from our windows, but we just can’t get to it easily enough,’” Allen said.

The CID and Gwinnett County have responded. Gwinnett Community Services and the county’s Department of Transportation are currently designing a trail that connects the extensive trail system within McDaniel Farm Park via Commerce Avenue to greater Gwinnett Place. This connection was called for in the CID’s Gwinnett Place Connected plan and in the Countywide Trails Master Plan. 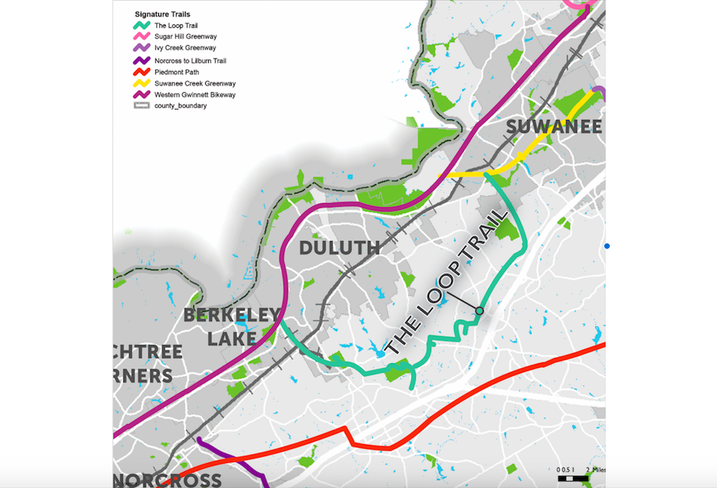 Courtesy of Gwinnett County; Image by Kimley-Horn
A detailed look at the Loop Trail, with Gwinnett Place center bottom.

The trail network would be the latest step in the ongoing effort to move Gwinnett Place away from its autocentric past and toward a more walkable, connected future.

Since 2010, Gwinnett County and the CID have partnered to build approximately 12 miles of sidewalks along some of the area’s roads, installed lighting and improved traffic flow at its major intersections to keep drivers and pedestrians safe. The CID is in the process of installing 50 new security cameras to help residents feel safe as they navigate the area’s roads and pedestrian ways.

Along with building infrastructure to enable Gwinnettians to walk rather than drive, the CID has also taken on cleanup and beautification projects to encourage locals to ditch their cars in favor of enjoying the great outdoors, including installing planted berms and removing trash and illegal signs from 10 miles of roadways within the CID.

All these improvements are being made with the idea that more people could very soon be living in the CID.

The Gwinnett Place Mall, which sits at the heart of the CID, is up for sale, and Allen said he wants to work with the eventual purchaser to pare back some of the area’s retail assets and reclaim its parking lots to make way for residential development. The result would be a denser live-work-play environment.

Having hundreds of miles of trails accessible from their backyards could be a significant draw for potential residents. Allen suggested that the eventual developer also will have an incentive to create even more trails, because building recreation trails can boost property values.

“There are a number of streams that were rerouted and paved over when the mall was built back in the 1980s,” Allen said. “I would love to see a developer dig those up and restore them to their natural beauty.”

This feature was produced in collaboration between Bisnow Branded Content and the Gwinnett Place Community Improvement District. Bisnow news staff was not involved in the production of this content.